Google revealed that it has received 2.4 million de-indexing requests following the “right to be forgotten” (RTBF) ruling in Europe and has acted on 43 percent of them.

The new figures constitute part of the internet giant’s semi-regular search removal transparency report, which it yesterday revealed will now provide further details on the kinds of requests being made and who is making them.

Google has also published a new research paper called Three years of the Right to be Forgotten, which is designed to “illuminate the effect” the RTBF ruling has had — and is having — on information access.

“This paper uses our manual reviewers’ annotations to provide a comprehensive analysis of the ways Europeans are using the ‘right to be forgotten’,” noted Google Transparency Report product lead, Michee Smith, in a blog post.

By way of a quick recap, the RTBF ruling, or “right to delist” from search engines, was the result of a 2014 ruling by the Court of Justice of the European Union (CJEU) and was intended to help people and companies hide web pages that contain irrelevant, out-of-date, or potentially “damaging” information. So those living in a European Union (EU) country can ask search engine operators, of which Google is the most prominent, to de-index pages from European versions of search engines — such as Google.fr (France) or Google.co.uk (U.K.). The company is also currently embroiled in a battle with France, which argues that delisting should apply to all Google Search engines globally.

Between May 2014 and February 2018, Google said it has received more than 654,000 individual requests, which constitute more than 2.43 million URLs for removal. But just 43 percent of the URLs have been removed, a figure that has remained roughly constant across the company’s previous transparency reports.

Google is now adding a little more data to the mix, though some of this only dates back to January 2016. For example, we now know that 89 percent of the requests came from private individuals, while 11 percent were from the “other” category, which could mean companies, politicians, or celebrities. 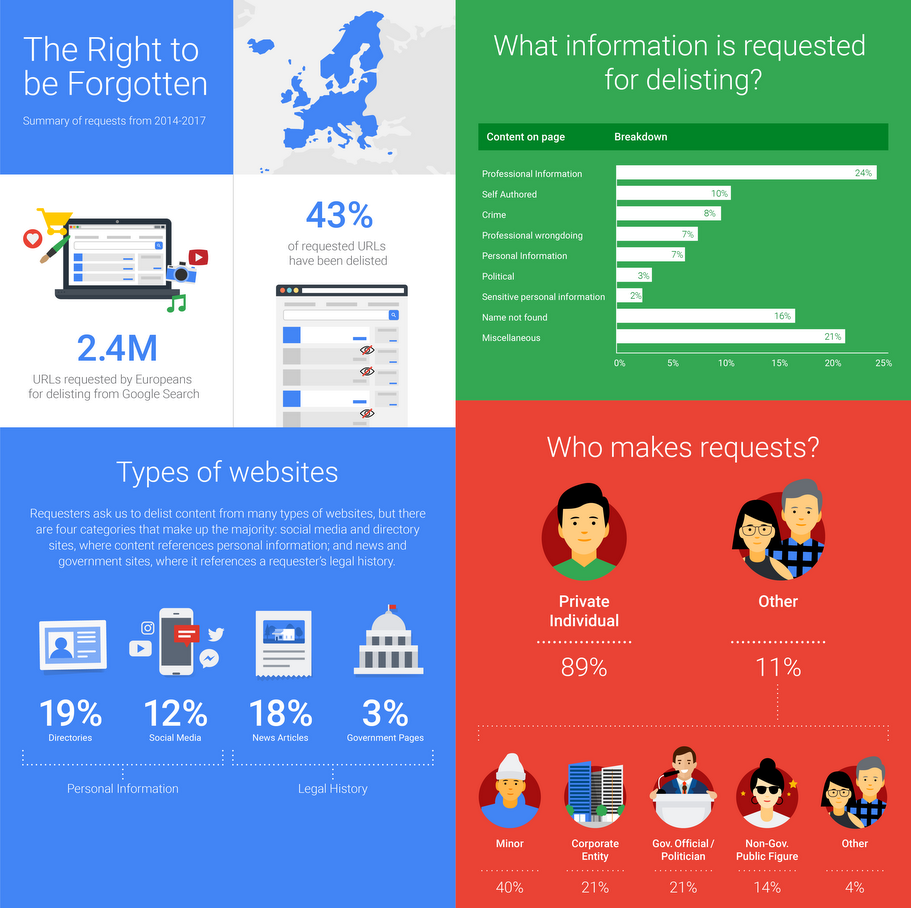 Above: Right to be forgotten: by the numbers

Additionally, the transparency report now outlines the kinds of websites and online properties that are most commonly targeted, as well as the types of requests that are being made — “professional information” makes up 24 percent of the total requests, though it’s not entirely clear what that includes. The next most common category has been tagged — somewhat helpfully — as “miscellaneous,” which accounts for 21 percent of requests.

Crime-related removal requests made up 8 percent of the overall total.