Google today announced that the Home Mini, which has become the most popular smart speaker in the world in less than a year, can now be purchased in aqua. The new shade of Home Mini will be available for $49 starting October 29 and adds to the existing coral, chalk, and charcoal shades that were introduced when the Home Mini made its public debut roughly one year ago.

Aqua Home Mini makes its debut ahead of an October 9 Made by Google event scheduled to take place in New York City, where Google is widely expected to introduce the Pixel 3, a smart speaker with a visual interface and touchscreen reportedly named the Home Hub, and potentially a range of other devices that interact with Google Assistant. 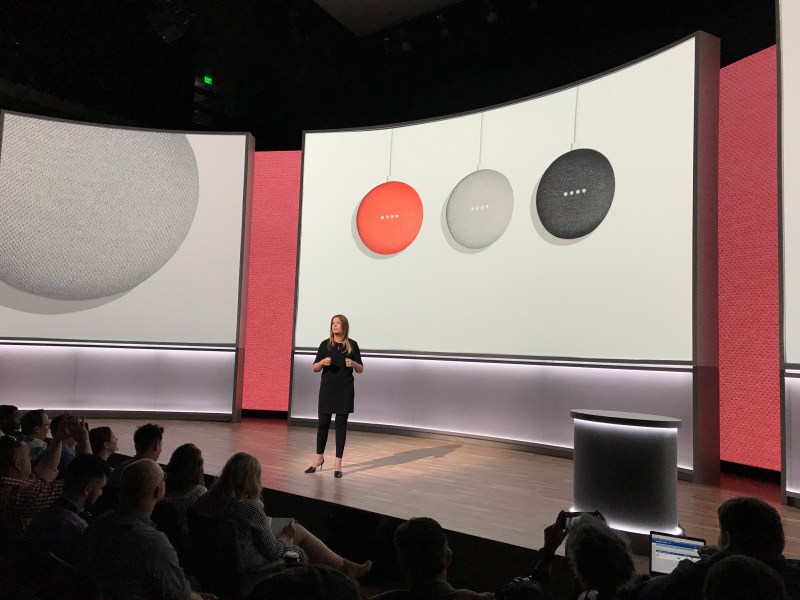 Above: Google‘s Isabelle Olsson unveils Home Mini smart speakers at a Made by Google hardware event in 2017 in San Francisco.

Home Mini’s biggest competition got an upgrade just a few weeks ago when Amazon introduced the third generation Echo Dot. Without question, the Home Mini outperformed the original plastic Echo Dot, but the new generation comes with a mesh finish like the Home Mini and promises a 70 percent improvement in volume output.

At $49 each, the Home Mini and Echo Dot are the two best-selling smart speakers in the world today.

The Home Mini was the best-selling smart speaker in the world in Q2 2018, according to analysis by Strategy Analytics, with 2.3 million units sold, followed closely by Echo Dot with 2.2 million units sold. Together, the two made up 38 percent of global market share.