South Korea, India, and Indonesia are the three countries in Asia that have the team at Google most excited in terms of mobile. Why? There’s a very clear-cut answer, based on numbers from a survey that Google conducted with TNS in June.

“Korea emerges as the smartphone paradise,” Google’s senior research manager for Asia-Pacific, Masao Kakihara, wrote in an official blog posting Monday. “They have the second-highest smartphone penetration in Asia, the third-highest proportion of people who consider the smartphone their main device, and they install the most apps on their phone.”

Meanwhile, India and Indonesia are interesting for another reason.

Facebook just debuted its Instant Article feature for Android in India yesterday in a clear nod to the strategic importance of the country’s mobile-first market for the social network. And we wrote earlier this month about how India and China are leading a $3 trillion boom in the global consumer electronics market between now and 2020.

“[India and Indonesia] have the lowest smartphone penetration in the survey and also the fewest number of apps installed on their phones (probably a consequence of having devices with far less memory),” Kakihara said.

“And yet, for them, the smartphone is more important to their daily life, not less: more smartphone owners in India and Indonesia consider their smartphone to be their primary device than in Singapore and Korea, even though they have fewer apps installed. Even when, and if, they do buy second devices like PCs and tablets, all their lessons about how the Internet works will come from that small touchscreen.”

You can check out the graph compiled by Google below to get a better idea of the mobile numbers in Asia by market: 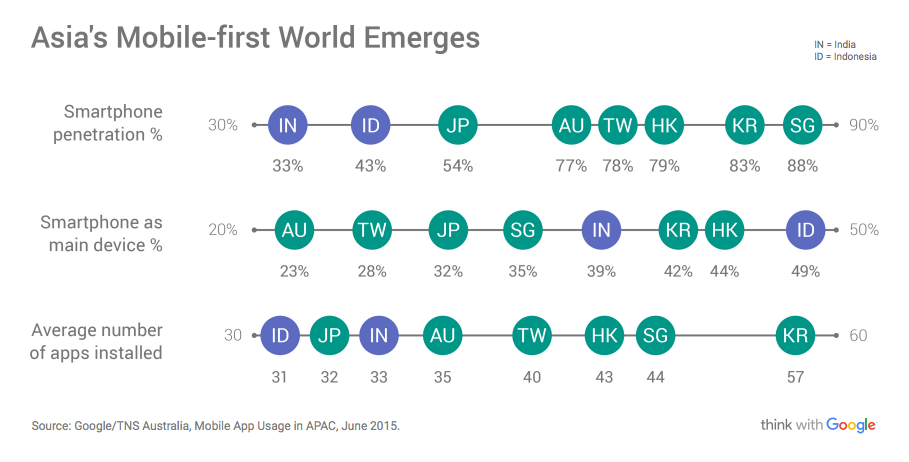