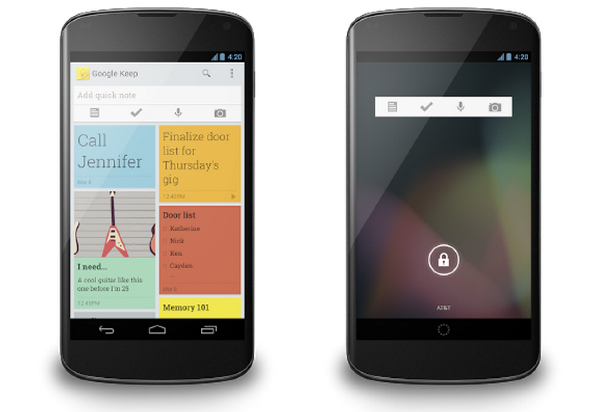 Google has its sights set directly on popular note-taking app Evernote with today’s launch of Google Keep, its very own note service.

Keep lets you take notes with text, photos, and audio recordings, all of which are synchronized across your devices. So far Google is only launching Keep on Android 4.0 devices and the web (Keep notes are stored on Google Drive), but we’ll also likely see it on iOS before long, too. Google accidentally revealed the details about Keep a few days ago.

Aside from that, it doesn’t look like there are many surprises with Keep — it’s exactly what you’d imagine a Google note-taking service would be. I hope it means some consolidation for Google’s note- and task-tracking services though, as the company already has Tasks integrated within Gmail, as well as Scratchpad on Chrome. I’ve avoided using these services because they simply don’t talk to each other.

On Android, Keep is available both as a standalone application and as a widget (for easy note-taking). I’ve been testing out the app for a bit now, and it seems to work as advertised. I haven’t been able to log into Keep on the web though, likely because of an onslaught of other curious testers.