We’ve been astounded how far the Web has come, Google engineering director Erik Kay said in a blog post. And he promptly unveiled a entirely new class of Chrome apps that are designed for your desktop, not the web.

And they’re more offline-capable than ever before. Watch out, Windows, Mac, and Linux.

Photo apps, video apps, and even 3D games are now running within the Chrome environment, and acting, looking, and feeling pretty much like normal, native, desktop apps. Google’s Chrome, of course, is a lightweight computer operating system built around the powerful functionality of the web — and Google’s Chrome browser. 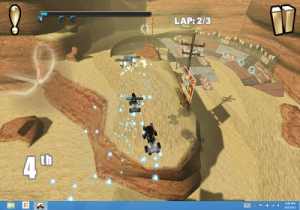 The company’s Chromebooks have long offered offline capability in Google Docs and other apps, but they’ve never been as powerful as the new apps. The new apps will also enable offline work without an Internet connection, but will be more focused on the app than the web: “more app, less Chrome,” Kay says.

This new style of app will connect to the cloud for syncing and sharing, of course, but will also offer desktop notifications, connectivity to devices such as cameras, phones, and USB sticks, and will sync across multiple apps so that page 56 of the document you’re editing on your Chromebook will pop right up when you check it on your smartphone.

We’ll be showcasing more about how Google is helping its customers adopt cloud services at VentureBeat’s CloudBeat conference next week (Sept. 9-Sept. 10) in San Francisco. The event explores some of the hottest cloud trends and technologies, including how electronics company Sanmina moved to Google’s Doc, Apps and more. Register today!

And, in a major new feature, Google is now introducing the Chrome App Launcher for Windows machines, which will live in your taskbar and allow you to launch Chrome apps almost like any other application on your computer.

On the list of new apps is Pixlr Touch Up, which allows you to, shockingly, touch up photos, as well as cropping and resizing them. It’s precisely the kind of thing that Web apps are not yet very good or fast at, particularly with today’s high-res digital cameras and ten-megabyte images. Another is Wunderlist, which features voice dictation and desktop notifications wrapped up in a to-do list app. And Google’s also promoting Cracking Sands, which is a 3D racing game that can be controlled by your Xbox controller.

Most of those things are tasks the Web isn’t yet great at.

Which is precisely why Google is unveiling this new kind of Chrome app, which “brings together the speed, security and flexibility of the modern Web with the powerful functionality previously only available with software installed on your devices.”

As these apps continue to improve, the question is whether you’ll still need to buy a Windows or Mac laptop to get the power and capability you want, or if you can simply pick up a $300 Chromebook and live in the cloud … but still have access to some desktop beef.