Google’s latest move on maps is impressive, and knocks out Microsoft’s latest effort to spruce up its maps with 3D imagery.

Separately, scared out of the shadows is a Waltham, Mass. start-up, Everyscape, which has a similar offering, but its twist is that it lets you cruise streets, landmarks and even enter buildings. It has a demo of Union Square, in San Francisco, and says a full lunch is planned for fall. It has a high gee-whiz factor, but takes some skill in directing yourself with navigational arrows — sort of learning how of to fly a magic carpet. More on Everyscape in a second, but first back to Google.

Google’s offering is called Street View. Go to Google Maps, select an address, and hit “street view,” and Google renders a 3D image of the street you’re on and surrounding view.

More impressive, it is interactive. Once you get the image (an example is below), you can drag it around, so that the image turns with you — a full 360 degrees. (Try it with the Golden Gate Bridge here). If you want a view of another place, you just take the little person-icon and drag them in the map to your desired location.

Microsoft, while doing something similar, is clunkier. The 360 degree swivel isn’t seamless. You can pick north, south, east and west, and have different screens for each. Still, Microsoft will no doubt scramble again to catch up.

More details on Google’s Street View from Greg Sadetsky: Cities covered so far are Denver, Las Vegas, Miami, New York and San Francisco. It is Flash, can be decompiled using Flare, and a server from Keyhole (a property recently integrated into Google earth) suggests Google Earth may be supported soon. 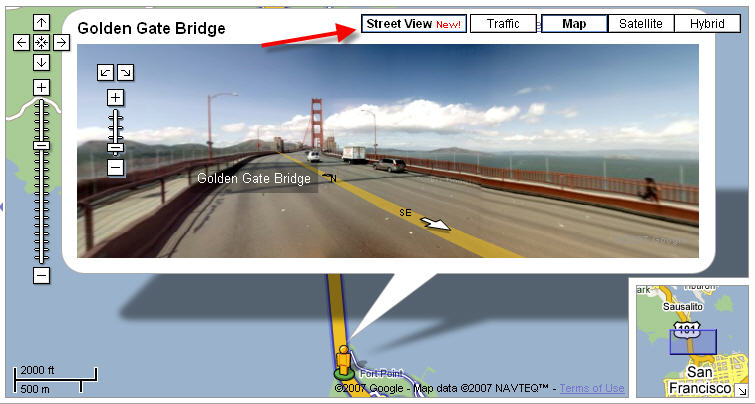 EveryScape, meanwhile, lets you do even more. It lets you circulate in a neighborhood and enter stores and restaurants. It provides an on-screen window providing reviews of these locales, from Yelp and elsewhere. Turnhere, another start-up, offers videos of various places, but doesn’t offer the navigational kick provided by EveryScape.

EveryScape wants users submit photos of their favorite places, so that it can offer more than the nine cities where it is launching by the end of the year. It also wants to let visitors share their stories, opinions and reviews about their daily experiences at these places, against the visual backdrops. This is all dangerously close to the direction likely to be taken by Google’s Street View and Google Earth — though Google has yet to prove adept at encouraging user participation around its products.

On EveryScape, someone looking to rent his or her apartment can add a “For Rent” sign and an apartment tour. The beginnings of an ultimate virtual world?

No download is required. EveryScape is Flash-based. The company said the images it uses come from standard digital single-lens reflex (SLR) cameras, and are uploaded to EveryScape for processing. It says it wants to cover the entire world.

Update: More here from the Mercury News’ Elise Ackerman, about how the latest technologies are shaping up in the competition between Microsoft’s Virtual Earth and Google Earth.