Google is bringing its new For You tab to Google Maps on iOS, the company announced today, and the feature is also expanding to more countries on Android.

Google announced a design overhaul for Google Maps at its annual I/O developer event back in May. One of the new features was a dedicated section inside the app called For You, which is basically a personalized culinary section showing local neighborhood places, such as trending restaurants, recommended eateries based on a user’s history, restaurant reviews, and updates from eateries that they follow.

Users can also choose to follow specific areas — be it an entire city, a street, or a neighborhood, and receive relevant updates in the For You section.

So far, the For You tab has been limited to just a handful of markets, including the U.S., U.K., Canada, Australia, and Japan — and only those using Android. Starting from today, however, anyone with an Android or iOS device in the aforementioned markets — plus more than 130 new markets — will be able to access For You. 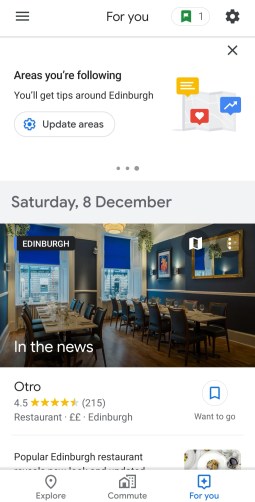 Above: Google Maps: For You tab

Google hasn’t revealed what the new markets are, but 130 new countries represents a considerable expansion and thus will likely include many parts of Europe, Asia, and the Americas.

This rollout comes a month after Google introduced a new way for people to “follow” a business, such as their favorite coffee shop, retailer, or — indeed — restaurant through Google Maps. This feature essentially positions Google Maps as something akin to a social network, with businesses able to post updates for their customers — updates that can be found in the For You section.

“The For You tab is designed to be a constant source of inspiration tailored to your tastes and preferences,” noted Google Maps product manager Jamie Aspinall, in a blog post. “Simply follow neighborhoods or places you’re interested in to get updates and recommendations — everything from recent news about an opening or pop up, a new menu item, and even restaurant suggestions based on what you’re likely to enjoy.”

Elsewhere, Google also recently launched a new Commute tab inside Google Maps that includes real-time visualizations of the current status of your bus or train.