The war against our inboxes is over — and we lost.

Google is rolling out yet another inbox tweak to Gmail, and it confirms yet again that there’s something profoundly broken about e-mail and our approach to it.

With the latest Gmail revamp, Google is trying its hand at a different sorting mechanism — e-mail types. The new Gmail inbox places e-mail within five distinct groups — primary (messages from friends), promotions (i.e., junk mail), social, forums, and updates. The new inbox is essentially a more intuitive version of Gmail’s existing label system, which only the most intrepid Gmail users even bother with.

Just think about crazy that is: In its quest to simplify email, Google isn’t removing features — it’s adding them. 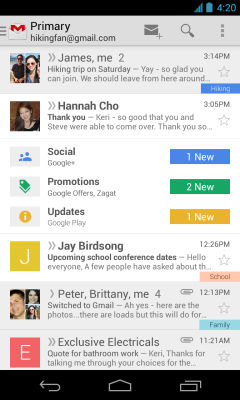 Above: Google is taking the shotgun approach to email sorting.

This isn’t the first time Google has tried its hand at taming your inbox. Back in 2010, it launched Priority Inbox, which automatically sorted e-mail based on how important Google thought they were. While the feature was hyped as the cure for e-mail overload, it’s obvious that it never quite lived up to those promises.

Gmail product manager Itamar Gilad sums up the situation well. “Sometimes it feels like our inboxes are controlling us, rather than the other way around,” he said in a post on the Gmail blog today. And he’s mostly right, save for one thing: It’s not our inboxes but rather the way we think about our inboxes that’s controlling us.

Email as a form of communications is a relic of an Internet age long gone. Similar to RSS feeds, e-mail is a flood of data, and it’s up to us to parse through it and figure out what’s worth reading and responding to. As Google’s Reader axing showed, that approach to news gathering is out of date in the age of Twitter and Facebook (and, sure, Google+). Clearly, it’s time for e-mail to undergo a similar transformation.

Unfortunately for the Gmail team, there are far fewer social signals for e-mail than there are for the sharing of web articles and videos, which makes it harder for algorithms to tell you what’s most important. Likewise, we don’t chose who we get e-mail from, nor can we cap how many message we can get at a given time. E-mail, by its very nature, facilitates the flood.

Worse, unlike blog posts, e-mails are directed, which means tha responses are, if not outright required, strongly implied. You can’t treat e-mail from your friends and family like your Twitter feed. E-mail is conversation.

All of these problems underscore why our attempts to tame our inboxes have been so futile, even as Google and other web companies have thrown so much weight at tackling the problem.

If our quest for a better e-mail ends at Inbox Zero, perhaps that quest is doomed from the start.