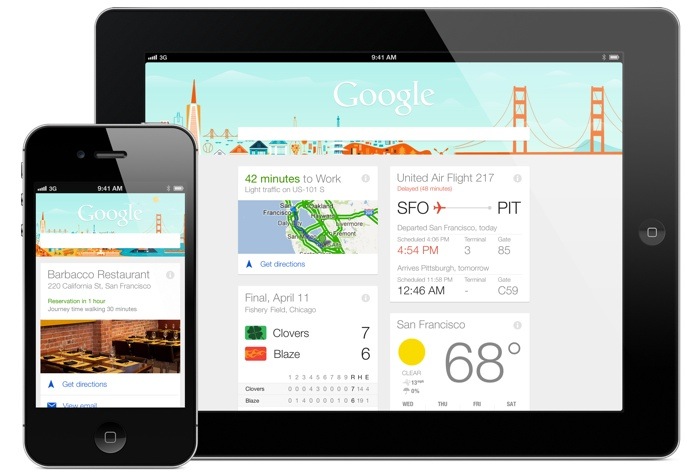 Google announced today that an updated version of its iOS search app brings Google Now to the iPhone and iPad. Just like on Android, it’s focused entirely on bubbling up information that’s directly relevant — like warning you if there’s traffic before your next appointment, or if it’s going to rain later in the day.

Unfortunately, iOS users won’t get access to all of the Google Now Cards (each of which offer different functionalities). According to a handy comparison chart provided by Google, the iOS version of Google Now won’t have the following cards: Boarding Pass, Activity summary, Events, Zillow, Fandango, and Nearby events.

On Android, Google Now has access to a lot more information, since it’s a core part of the operating system. Google will likely never be able to give the iOS version of Google Now all of the features its Android sibling has — but Google has managed to bring over most of the core functionality.

It also looks like Google is gearing up to bring Google Now to Chrome on your desktop, according to some recently discovered testing code.

I haven’t had a chance to try out the app yet (look for a hands-on later today), but it’s pretty obvious Google is turning its iOS search apps into a mini-ecosystem. It’s like the reverse of what Facebook Home is doing on Android. With Google Now, you’ll have even less of a reason to leave the Google search app on your iPhone. It doesn’t need specific commands like Siri to retrieve useful information, which could make it an even better digital personal assistant.