Google has finally pulled the plug, ceasing censorship on Google.cn by redirecting users to its unfiltered Hong Kong property, Google.com.hk.

Relations between Google and China have been strained since the start of the year, exacerbated by attacks from hackers on the search engine. While Google never explicitly said the attacks were directly connected to the Chinese government, it was all but implied in the search giant’s language and supported by later research from independent security consultants. This came on top of the government’s highly controlling censorship requirements and refusal to allow access to websites like Facebook, YouTube, Blogger and more.

The company warns that increased traffic on its Hong Kong servers might slow down search results, but says the shift was explicitly designed to give users in mainland China access to information and pages that their government previously blocked.

“The Chinese government has been crystal clear throughout our discussions that self-censorship is a non-negotiable legal requirement,” reads the post on Google’s Official Blog. “We believe this new approach of providing uncensored search in simplified Chinese from Google.com.hk is a sensible solution to the challenges we’ve faced — it’s entirely legal and will meaningfully increase access to information for people in China.” 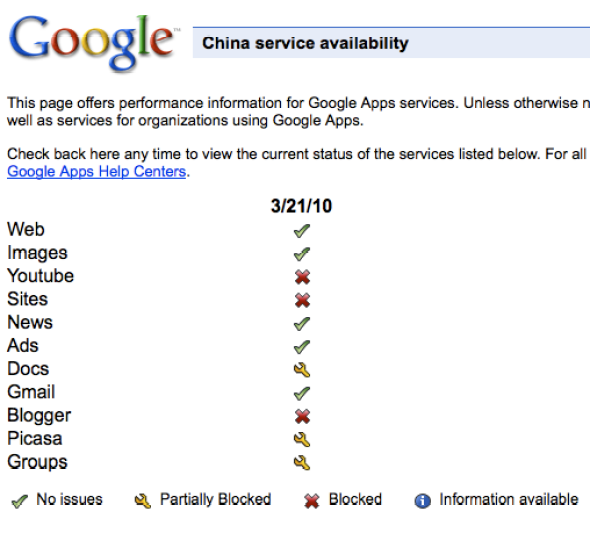 Funneling users to a different site is a workable solution for now, but Google acknowledges that the Chinese government could choose to shut off access to the new site at any time. To keep tabs on what is and is not being allowed, the company launched a web site (see screenshot above) listing which of its services are being permitted in China, updated daily. Right now, web and image search, news, ads and Gmail have the green light, while YouTube, Blogger and Google Sites are down.

The change in strategy does not mean that Google is pulling out of China entirely. It will still base some sales and research operations there. The company also included a disclaimer in its announcement, asking that Google employees in China not be blamed or targeted for their employers’ actions — executives in the U.S. are to be held responsible for these decisions.

When Google first announced that it would be rolling back censorship in January, employees reported feeling an immense sense of pride that their company was doing the right thing, going out on a limb and sacrificing revenue in the name of freedom of information. Shortly thereafter, Secretary of State Hillary Clinton gave a speech exalting unrestricted internet access as a right that her department would defend worldwide. It seemed to Googlers that their executive team had preempted, and maybe even set U.S. policy.

But now that the change has actually been made, it’s somewhat bittersweet for those on the inside. It turns out that the company won’t be leaving much behind revenue-wise — but there’s a sense that its missing out on a huge opportunity to shape public and civil discourse in China in a positive and meaningful way, several sources close to the company said following the news.

These same sources tell us that Google is already moving senior executives in China to their other offices. There was a lot of money invested in the search engine’s efforts there, but also human capital, that will be redistributed for now.

It will be interesting to see how long it takes China to fully shut off access to Google.com.hk. No news has been released on how the public or the government there has reacted to the company’s incredibly bold, yet not unsurprising move.