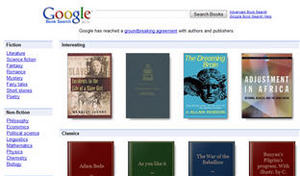 Google has settled lawsuits brought against it by authors and publishers who claimed Google’s scanning and indexing of copyrighted books was illegal. This ends a long-running stand-off. The suits were filed in 2005, a year after Google started its practice of scanning the world’s books.

The accord calls for Google to pay $125 million (more about where that money’s going in a second). In return, Google gets rights to display large portions of these in-copyright books, not just small abstracts.

The settlement must still be approved by the U.S. District Court for the Southern District of New York.

Notably, Google will also allow people to buy online access to the books. It will will create a royalty system to compensate authors and publishers for access to their works, governed by an independent, nonprofit Book Rights Registry (the registry will be funded by Google’s settlement payment). Royalty revenue will come from institutional subscriptions allowed under the system, book sales and ad-revenue sharing.

Book Search helping readers all over the world find books in over 100 languages. Google says more than 20,000 publishers have joined its partner program to allow readers to preview the books they find before buying them.