Google is finally bringing the Google Play store, including its more than 1.5 million Android apps, to Chrome OS. Google Play will first arrive with Chrome OS version 53 on the dev channel in early June, starting with three Chromebooks: the Asus Chromebook Flip, the Acer Chromebook R11, and of course Google’s Pixel 2. Over the coming months, the feature will come to more devices on the beta channel and eventually the stable channel.

Kan Liu, product management director of Chrome OS, told me that the Google Play store should start hitting the stable channel in September. By the end of this year, he promised “most Chrome OS devices” (full list) would support Google Play. That includes both ARM and x86 architectures. Google has also been working with its Chromebook partners to launch new devices that will ship with Google Play out of the box.

Android apps on Chrome OS have been a long time coming. In June 2014 at Google I/O, the company promised Chromebooks would run Android apps. In September 2014, the Android apps Duolingo, Evernote, Sight Words, and Vine showed up on Chrome OS. Then Google went silent. Rumors started up again this year, leaks inevitably followed, and now it’s all being made official two years later at I/O 2016. When Liu showed me a Chromebook with Google Play, the first thing I noticed is the store icon in the bottom left corner (the renders don’t show this as they’re of an older build than I saw). The Google Play icon is even positioned to the left of the Chrome icon. I asked if that was the default.

“We’re always experimenting and figuring out where is the right place to discover it and use it,” Liu started by saying. “But this so far has been a good place for a lot of people to find it easily and access it easily. So for now this is definitely where we’re putting it, but we’re going to test everything.”

And yet, while the functionality really is coming now, there is an important distinction to emphasize: This is more than just Android apps on Chrome OS. This is all of Google Play on Chrome OS. So this is way more than “just” the 1.5 million apps in the store.

“We’re going to try to bring together the breadth and versatility of the millions of apps in the Play store on top of the speed, simplicity, and security of the world’s most powerful and popular browser,” Liu told VentureBeat. “What that means is, as a user now, you’re going to be able to get onto your Chromebook and have all your favorite Android apps, games, and media content.”

Your settings and app credentials can be brought over as well, so any subscriptions or in-app purchases you have should work like on your mobile device. You can finally use your favorite Android apps on a laptop, whether that’s Skype on a bigger screen, WhatsApp with a full keyboard, or whatever mobile game you’re currently addicted to. When you first get Google Play on your Chromebook, the operating system will notify you of the major update. You then have to agree to the store’s terms and conditions, just like on an Android device, and then Chrome OS seamlessly passes your Google account credentials to Google Play. Want to switch Android accounts or add a new one? The Android Setting app is right there.

Even when an app expects or requests something that your Chromebook doesn’t have, Google Play handles the issue. Just like when you have a tablet without cellular connectivity, Google Play simply won’t let you download apps that require a phone number.

On Chrome OS, Android apps can be displayed in three different window sizes. Users can multitask with multiple Android apps, get Android notifications, and use file sharing between Chrome and Android apps through the Files app.

Mobile apps on a laptop isn’t ideal, but Liu says Google hasn’t engaged with many Android developers. His team has mainly focused on high-profile app makers, like Adobe. The announcement is being made at the I/O developer conference so that the company can let developers know this is coming, hopefully convincing them to update their apps.

Google did talk to Adobe so that it could improve Photoshop Mix in areas such as keyboard, mouse clicking, landscape mode, and multi-window support. But with Word, for example, everything just worked out of the box, and Google didn’t even bother getting in touch with Microsoft.

“It turned out Microsoft did a great job of making Office work really well with a keyboard and a trackpad,” Liu said. “Shocking! So we didn’t have to talk to them at all, or have them do anything additional.”

Liu said that in his team’s tests, the “vast majority” of apps work without any modification. Still, many could be made even better with only slight tweaks.

Many Android games are designed for touchscreens, for example, and would play significantly better on Chrome OS if game developers simply added support for the left and right arrow keys, Liu said. Dragging objects on a screen can also be a pain with a trackpad, but developers can enable two-finger scrolling to make the process much easier. Laptops are a new form factor for Android, after all, even though the app and codebase are the same. Liu believes Google will be able to position this as a great business opportunity for Android developers, as they should have little work to do in return for a lot of potential reward.

Generally speaking, Android apps designed for smartphones suck on tablets. But Liu argues that because Chrome OS has multi-window support, Android apps on Chromebooks work a lot better. He noted that messaging apps, including Hangouts and Messenger, offer a great experience because users often chat while multi-tasking on their computer. Even Facebook Messenger’s chat heads work seamlessly, Liu said. Other great Android features also work out of the box, including notifications, inline replies, and intents.

Chrome OS has more to gain than to lose. And that is largely thanks to how exactly Google implemented the Android framework into Chrome OS.

“We’re running the Android framework, unchanged, inside a Linux container,” Liu explained. “This means the system is fully CTS compliant. We’re then putting this on top of the existing Chrome OS stack, in terms of connectivity, Wi-Fi, Bluetooth, input/output, graphics layer, everything. So we’re sharing the same resources, meaning there’s no overhead too. As an end user, you get a seamless experience, you don’t get performance overhead, and you get the additional security constraints of Android and Chrome OS.”

Best of all, updates on Chromebooks are seamless. As a result, users will now not only get Chrome OS updates every six weeks, but the latest Android framework version too.

The Android framework weighs in at “several hundred megabytes,” Liu said. So the first time Google Play comes down as part of a Chrome OS update, it will be a sizable download. But after that, Chrome OS’ differential updates mean downloads will be as small as they currently are. 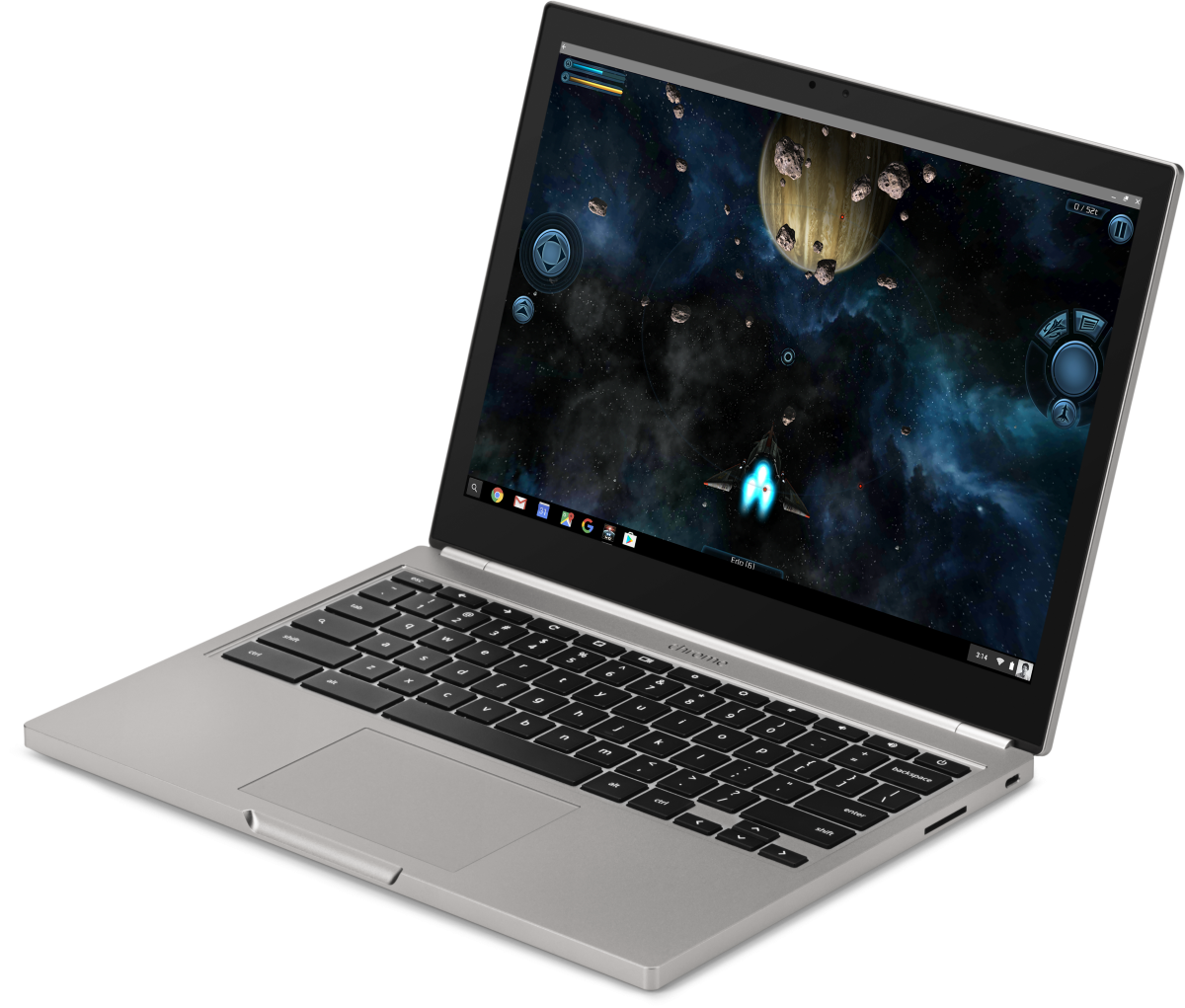 My main gripe with Chrome OS has always been the fact that the device essentially becomes useless when you don’t have an Internet connection. Because Android apps are designed to work offline by default, as on all mobile operating systems, that’s no longer the case. At least on paper, Google Play looks like it will make Chrome OS a serious contender for many who were previously not impressed with its online dependence.

On the flipside, Google is essentially admitting that the Chrome Web Store wasn’t cutting it. Before today, Google would tell anyone who asked that Chrome apps were powerful and everything a casual laptop user needed. That messaging is now changing, ever so slightly.

For now, Google Play and the Chrome Web Store will continue to exist on Chrome OS, but I specifically pushed Liu on what the team is thinking about doing with the latter.

In short, the app strategy for Chrome OS is still in flux.

IDC recently found that in Q1 2016, Chromebook shipments overtook Macs in the U.S. The firm didn’t release this report publicly, but after Google told us we confirmed with IDC that Chrome OS was the second most popular computer operating system (after Windows) in the U.S. last quarter.

Google is hoping that Google Play integration will keep this momentum going. The company just needs to figure out how best to market the change.

My last question to Liu: Should this still be called Chrome OS?