Google today announced a few enhancements for the Google Play Developer Console, which Android app developers can use to monitor the usage of their apps.

Now developers have an easy way to see the most common themes that end users mention in their app reviews. Google bubbles up these themes in the new Review Highlights feature, Google Play product manager Fergus Hurley wrote in a blog post. More enterprising developers can use the new search box. 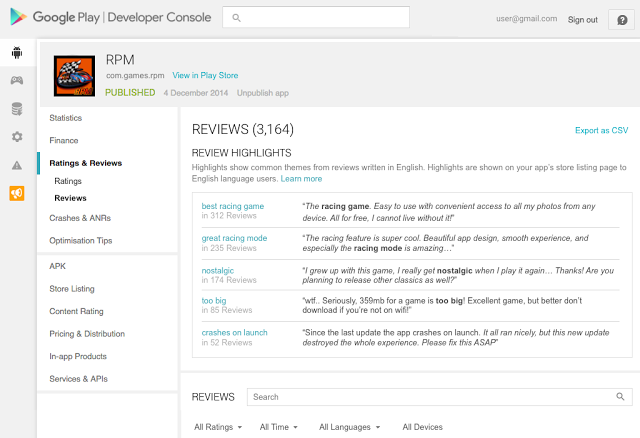 Above: Review Highlights in the Google Play Store.

When it comes to ratings, Google is doing more there, too. You can now check out charts of ratings over the day, the week, or the month. The console also now lets developers run queries on ratings by country, language, the device, the version of the app, the version of Android users are running, the country where the user made the rating, and the language spoken by people who leave ratings.

Google is also providing more granular information that starts to put it in competition with application performance management (APM) vendors such as New Relic — but in a way that takes advantage of the data that Google already possesses.

“See certain device data such as RAM, CPU, and screen size so you can more easily identify problems users are mentioning in user reviews and debug such issues,” Hurley wrote.