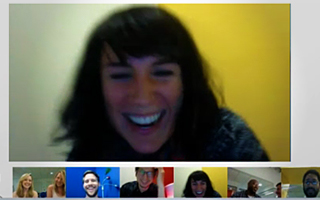 Developers, are you ready to let your end users Hangout?

Google has just launched a developer preview of the new Google+ Hangouts API. The new API is just one component of the Google+ platform. It will allow developers to quickly build real-time applications and to create their own own experiences with and around Hangouts.

This means that you’ll be able to run your application — a polling app, an avatar-changing plug-in, a game, you name it — directly inside a Google+ Hangout.

To integrate your application with Hangouts, simply register your built application with Google and specify which person or people on your team can load it into their Hangouts. Your application will act like a normal web app, and it can also participate in real-time events with new APIs like synchronization. You can make sure all your users are instantly notified of changes made by anyone else by creating a shared state among all instances of your application.

Since this release is still just a developer preview, devs are limited as to who can load each application. In the developer console, the “Team” link will allow you to add members with whom you’d like to share the app. Those users will have to use the special Hangouts URLs to access your apps. When the API launches publicly, you’ll be able to share apps with everyone on Google+.

Google is using the preview period to collect feedback that will be used to improve the API; the company warns that the Hangouts API functionality is going to change in the weeks and months ahead.

Google has also rolled out a smattering of multimedia APIs. These will allow you to perform simple audio and video functions such as muting Hangout participants.

As Hangouts technical lead Richard Dunn wrote on the company blog, “In the three months since we launched face-to-face-to-face communication in Google+ Hangouts, I’ve been impressed by the many ways people use them. We’ve seen Hangouts for game shows, fantasy football drafts, guitar lessons and even hangouts for writers to break their solitary confinement… Real-time applications are more engaging, fun and interactive but were hard for developers to deliver. Until now.”

Google has given developers some sample code and three sample apps in the documentation to get you started.