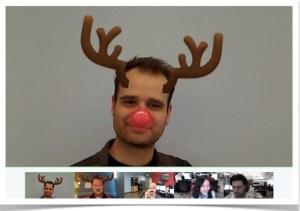 Quick, name one thing that Google+ does better than Facebook? The answer is Google+ hangouts, a Skype-like group video chat (and broadcast) feature. Wednesday, the search giant released a number of improvements to make its most-prized social possession more striking.

What’s new? In a nutshell, hangouts are far more accessible.

Users can start impromptu live video chats right from Google+ conversation threads on the web (as pictured below), and on mobile when the new Android app drops in a few days, as well more easily discover and receive notifications for hangouts currently in progress. They can also now call any phone number, not just ones in the U.S. and Canada, to add non-members to their chats.

For the celebrity user, Google+ has improved its beta broadcast feature to enable users to automatically record and then upload the live video stream to YouTube following the broadcast.

Not a G+ user yet? Here’s the skinny on hangouts: They are group video chats that members can use to start conversations with other G+ members — and even non-G+ members — on the web or via mobile. They’re a viable replacement to the conference call or simply a fun way to spontaneously video chat with friends and family members. Select celebrities can even use them to broadcast live to large audiences.

And if you’ve been paying any attention to the social media space in the past six months, then you’re familiar with the Facebook versus Google back-and-forth. Facebook has nothing like hangouts — yet. Which explains why Google would feel compelled to nurture and show off its potentially prize-winning social pony.

The company seems also keen on driving home the emotional appeal of group video chat. It’s a strategy that echoes Apple’s promotional efforts around FaceTime, and it’s one that could go a long way in convincing folks on the bonuses of Google+ over Facebook. Google senior vice president Vic Gundotra, when describing the new hangouts features, put it best: “By bringing people together, face-to-face-to-face, we’re hoping to make the world a bit cozier, and lift people’s spirits a bit higher.”

Is the hangouts strategy working? It may be too soon to tell. We asked Google for metrics on hangout usage, but the company isn’t ready to reveal anything on that front just yet. In October, Google did share that more than 40 million folks use G+, and that 3.4 billion photos had been shared through the social network.

Still, today’s release strikes us as proof that Google has no intentions of backing down in the feature wars and will continue to invest in rapidly iterating on its most compelling feature. It’s almost like Google is channelling hip hop artist Chris Brown and saying, “Look at me now.”