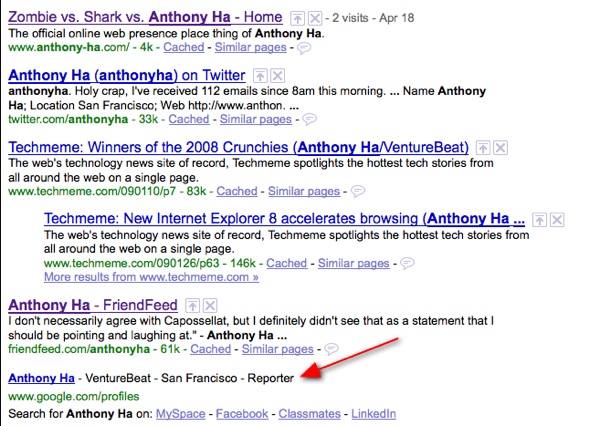 It can be awfully frustrating that people’s first impressions of you will probably be determined by what shows up at your search results in Google — something that’s largely out of your control, until now. But the search giant just announced it’s giving you a (small) amount of control over that first page of results, by inserting your Google profile at the bottom.

Basically, this means that when people search for your name on Google, you’ll be able to determine at least one of the items that they see on the first page. Of course, there are already many ways for people to influence those results, but they’re indirect and involve a judicious application of search engine optimization. In contrast, this is simple and direct — just make a profile, and it shows up in the results.

This should also lead to a wave of sign-ups for Google’s profiles — which are also used in Google’s Friend Connect initiative to allow developers to add social features to websites. By bringing those profiles to the first page of your results, they automatically become a key part of your online identity. The news already spurred me to create a public profile, and there it is, in my Google results. There are some unanswered questions, as John Battelle notes, mainly what happens when more than one person with a given name has created a profile.

So how big a deal is this for social network networking sites? Is Google about to use its search dominance to muscle into a much bigger role in the landscape? It’s probably going to require a bit of a tightrope walk, since obviously Google could attract a ton of criticism if it’s too heavy-handed about how it proceeds. For now, though, the implementation is pretty subtle. My Google profile shows up at the very bottom of the search page, in slightly smaller type than the other results. Not only does that mean it’s below my profiles on Facebook, Twitter, LinkedIn, and FriendFeed, but the link also includes options to search for me on MySpace, Facebook, and other sites.

Google is also promoting the initiative by presenting a “Create your profile” link whenever you’re logged into your Google account and search for “me”.

Update: Google’s Joe Kraus told me a little bit more about how the profile links will work. Basically, as more people make profiles, there will be an algorithm (as usual, Google isn’t sharing too many details about it) that decides which four are the most relevant. That relevance could be based on the completeness of the profile, geographic location, links, and more. Plus, if a user is logged into their Google account, their social connections in Google would also play a role.

As for how we can expect this to evolve, Kraus said: “This is like the first, biggest part of the vision. We have known that there is a user demand for having some control over what people find when people search for you on Google. Giving people some mechanism of controlling it, we think and we hope, is meeting a big piece of consumer demand. There are other offshoots of it for sure.”