Google appears to have launched a voice app to talk to you about its annual I/O developer conference, set to take place May 17-19 at the Shoreline Ampitheatre in Mountain View, California. Unfortunately, the conversation action made by Google for its assistant on the Google Home smart speaker didn’t work.

Repeated attempts by VentureBeat to speak with the Google I/O 17 action about the I/O keynote speech, the date, and location — questions the action tells you to ask it on Google Home app — were met with silence.

Around 2 p.m. PT Monday the action was pulled from the Google Home app and could no longer be called upon when speaking with the Google Assistant on Google Home. 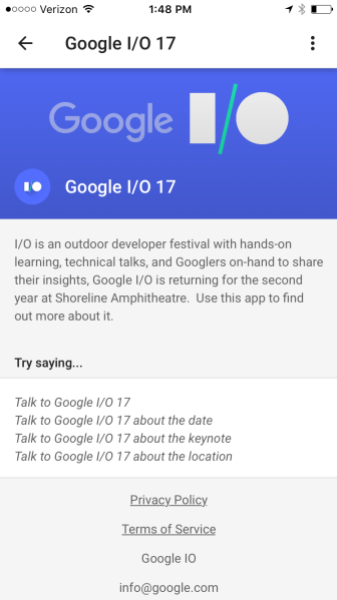 Based on news and activity in recent months, a broad range of potential announcements could be made at Google I/O as it relates to the Assistant and the Google Home smart speaker, both of which made their debut at I/O last year.

Perhaps Google could release its own smart speaker with computer vision to compete with Alexa’s new Echo Look.

Or, instead of going for fashion and computer vision, the next-gen Google Home could go for utility and quality. Last month The Information reported from an undisclosed source that the next generation of Google Home speakers could have mesh network Wi-Fi inside.

A few weeks ago Google said its Assistant is now able to recognize unique voice signatures and Google accounts for up to six people.

Should Google announce an increase in the number of unique voice signatures its Assistant is able to identify, applications for the use of the Assistant may increase in settings outside of the home, like in classrooms or among small businesses, startups, or teams at larger companies.

While mesh networks and unique voice signatures and computer vision are all exciting and sexy, there are still some basic additions to the Assistant that could be announced at I/O. For example, Google Assistant is still unable to add an event to a calendar, something Alexa does with ease.

Google Assistant could also begin to bring third-party actions to devices beyond Google Home. Millions of smartphones running Marshmallow or Nougat, Android TV, Android Wear, and other devices that have or will soon have Google Assistant do not yet have access to the nearly 200 third-party conversation actions that have been made for things like Kayak flight searches, WikiHow DIY tips, in-home elder care, and interactive games. Third-party voice apps or services are currently only available for Google Home.