With the launch of the T-Mobile G1, Google is formally launching the Android Market where users can download applications for their mobile phones with Android software. Google has also set the terms for developers to upload applications with minimal fees.

Users can download applications, rate them, and leave comments. The users’ ratings, along with anonymous usage statistics, determine how the apps are ranked and presented in the Android Market user interface.

There are 50 free applications available already, Erick Tseng of Google said last night. Developers can start uploading more applications starting on Monday. All the developers have to do is register and pay a $25 application fee. Then they can upload apps without further testing or approval. 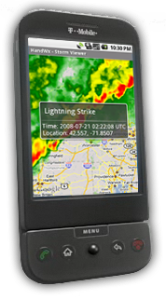 Starting in the first quarter, developers will also be able to distribute paid applications. In those apps, developers get 70 percent of the revenue, while the rest goes to carriers and billing settlement fees. Google won’t take a percentage itself.

The apps available today include location-based tools, multimedia, barcode scanners, travel guides, and games. One app that was announced today is the iMap Weather app, which overlays Doppler radar weather data over Google Maps so that you can see storm activity in any area.