Google today announced that its Safe Browsing service, which first launched in 2007, now protects more than 3 billion devices. That number is up from over 2 billion the company said were protected in May 2016.

Safe Browsing provides lists of URLs that contain malware or phishing content to Chrome, Firefox, and Safari browsers, as well as to internet service providers (ISPs). The service can also be accessed via the public API or directly, by manually changing this URL to check whichever site you want. Google has been extending Safe Browsing to its various products over the years, including Android, Ads, Analytics, Gmail, Google Play, and so on.

Google used today’s milestone as an opportunity to share how it’s managed to grow the service so rapidly, and to tease what’s coming next. The biggest driver for the former is of course the rise of mobile devices and the latter naturally means name-checking AI.

Due to mobile constraints, Google’s security team has had to consider slow connections, expensive mobile data plans, and scarce battery capacity. Changes that take these into consideration first rolled out for Chrome on Android in December 2015 but are now used everywhere. Safe Browsing only sends the most vital protective information to a given device, and compressed it “as tightly as possible” (on both desktop and mobile).

Most of the time, Safe Browsing protects users without getting in the way. That means you simply don’t see certain malicious search results, Android apps in Google Play, questionable messages in Gmail, and so on because they are simply filtered out. Other times, you’re presented with a interstitial like the one pictured above (on desktop) or below (on mobile): 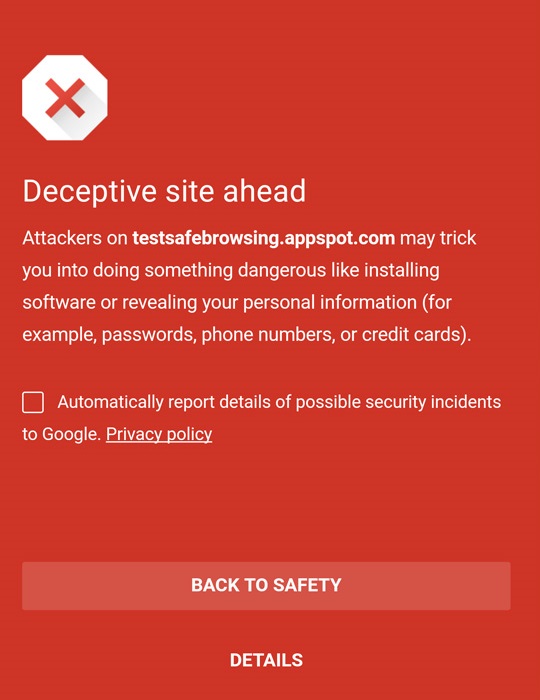 These are sites that try to phish you, install malware, or download other undesirable software. They are blocked in Chrome, Firefox, and Safari, though you can manually get around the block if you so choose. Web developers and app developers (such as Snapchat) also integrate Safe Browsing to check URLs before they’re presented to their users.

As for AI, Safe Browsing has been using machine learning for many years to detect various types of threats. Google didn’t offer much detail on how this will evolve, but it did note the service has to address today’s “AI-first world” and that the team is “continually evaluating and integrating cutting-edge new approaches to improve Safe Browsing.”