A group of search engines from around the world are banding together to demand European Union regulators address Google’s dominance in the online search market. They are also urging the EU to take a closer look at Google’s controversial auction process.

The news comes hot on the heels of the U.S. Department of Justice’s (DOJ) antitrust case, which formally launched last week. The suit alleges that Google violates anti-competition laws by crowding out rivals in the internet search and advertising markets.

DuckDuckGo (U.S.), Ecosia (Germany), Lilo and Qwant (France), and Seznam (Czech Republic) have penned an open letter to European Commission executive VP Margrethe Vestager asking her to take a “renewed look” at the policing of Google’s search market dominance. As an initial step, the companies are calling for a trilateral meeting between themselves, the European Commission (EC), and Google to look at the issue of search engine competition in Europe and elsewhere. More specifically, Google’s smaller rivals want to establish a more “effective preference menu,” giving Android users an easier way to choose a default search engine when setting up their device for the first time.

We are companies operating search engines that compete against Google. As you know, we are deeply dissatisfied with the so-called remedy created by Google to address the adverse effects of its anticompetitive conduct in the Android case. We understand that Google regularly updates you regarding its pay-to-play auction, but it appears that you may not be receiving complete or accurate information.

We are writing to request a trilateral meeting with your office, ourselves, and Google, with the goal of establishing an effective preference menu. Our respective designees could work in advance to create a tight agenda for this meeting to ensure it is productive and collaborative.

We are heartfelt supporters of the Commission’s ambition to remediate entrenched Google competition harms. We are asking to put these intentions into practice now, making full use of your existing tools.

Thank you in advance for your consideration.

This latest development in Google’s antitrust saga can be traced back to 2018, when EU antitrust regulators hit the company with a record $5 billion fine (currently under appeal). The fine was levied over the way Google bundled its services on Android, giving handset manufacturers little choice in terms of which Google apps and services to preinstall.

In response to the ruling, Google overhauled its Android licensing model in Europe, electing to separate Google Search and Chrome from its other suite of apps and to offer different licenses for each “bundle” — which it would charge for. As part of these measures, Google introduced an auction process that would give rival search engines a better chance of becoming the default provider on mobile devices sold in Europe. This would involve Google serving up a “choice screen” during a device’s initial setup process. The winning bidders would agree to pay Google every time a user chose their search engine as the default, and the whole process would start all over again each quarter.

Rival search engines have long criticized this “pay-to-play” process, and some of them have opted not to participate on the grounds that the auction is “unethical and anti-competitive.” DuckDuckGo has argued that search engines that “squeeze money out of every last drop of people’s personal information” are better positioned to outbid privacy-focused or ethical search engines.

“An auction system pushes participants to bid up to their profitability per user — effectively transferring their margins to Google,” a DuckDuckGo spokesperson told VentureBeat.

“Ethical search engine” Ecosia, which uses its profits to plant trees, agrees the auction system is more likely to favor search engines that are friendly to Google’s bottom line.

“The incursion of financial cost, in return for the right for representation, cannot be fairly applied in the search engine market — it is only ever going to price out genuine alternatives in favor of Google ‘mini-me’s’ and affiliates,” Ecosia CMO Hannah Wickes told VentureBeat.

Just last week, DuckDuckGo inked a separate open letter that asked Google why setting alternative search engines as a default on Android requires so many steps. This builds on a number of recent blog posts dedicated to search preference menu design and the broader auction process, with DuckDuckGo going so far as to design its own hypothetical search engine choice screen. 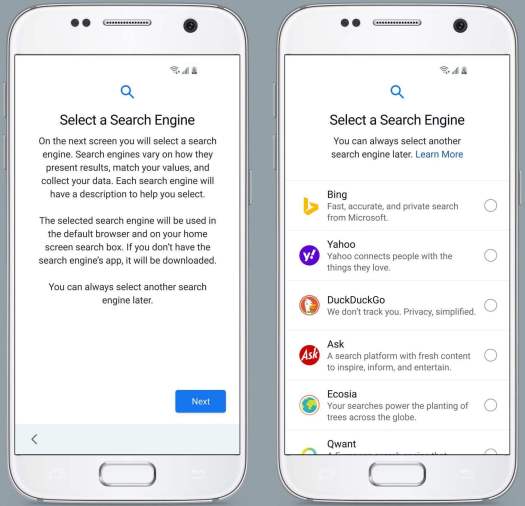 Above: DuckDuckGo created its own “template” for a default search engine menu on Android.

Rather than imposing an artificial limit of just four options, as is the case with Google’s current auction process, DuckDuckGo suggested a scrollable screen with additional options and an introduction explaining in simpler language how it all works.

“If the objective is to incentivize greater consumer choice in the search engine market, a properly designed and structured preference menu is a great way to go about it — but this should be done on the basis of criteria that are relevant for consumers, such as market share,” the spokesperson added.

Ecosia broadly agrees with this assertion and had previously created its own mockup of an effective choice screen. 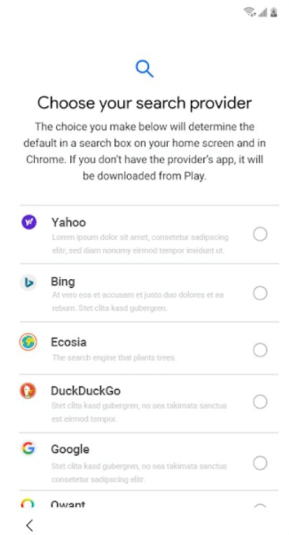 Another concern is making the search engine choice screen more visible. The screen only shows up now when someone is setting up their Android device for the first time or has factory-reset their phone. Ecosia wants all users to see the choice screen via proactive alerts.

“Going forward, it is essential that the replacement finds a way to reach all users, not just those who’ve purchased new devices,” Wickes said. “We will be pushing for the auction screen’s replacement to be shown on existing devices as well, either through push notifications or when new Android software is installed.”

The five search engines hope their collective voice will convince EU commissioners to look into the way Google has responded to previous complaints. In other words, Google’s antitrust woes may be about to get much worse.