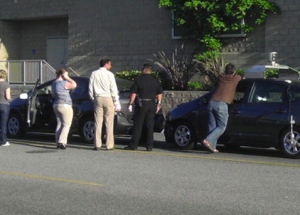 For the first time, one of Google’s much-hyped self-driving cars has been in a car accident, according to auto blog Jalopnik. But it’s actually a mere human’s fault.

Google said the accident, in which a Google-owned Toyota Prius rear-ended another Prius, happened when a driver — rather than the car’s computer — was in control. The accident, which happened earlier this week, occurred not far from Google’s Mountain View, Calif., headquarters.

“Safety is our top priority,” a Google spokesperson told VentureBeat. “One of our goals is to prevent fender-benders like this one, which occurred while a person was manually driving the car.”

The accident itself was thankfully just a fender bender, as seen in the photo above.

Last October, Google engineer Sebastian Thrun nonchalantly announced on the company’s blog that it had developed the technology to let cars drive themselves. Google also told us its self-driving cars have now traveled “160,000 miles autonomously without incident.”

If it can be confirmed by a third party that Google’s self-driving Prius was in fact wrecked by a human, maybe Google should just let the computer drive in the future.

A video of a Google self-driving car can be found below: