Google has sent out invitations to journalists for a September 29 event in San Francisco where there will be “some tasty new treats.”

There will also be “hands-on time” following the event, which starts at 9 a.m. (PT) and will be live streamed at http://youtube.com/google, according to the invitation. It will be held at Left Space Studios in San Francisco’s Mission District. 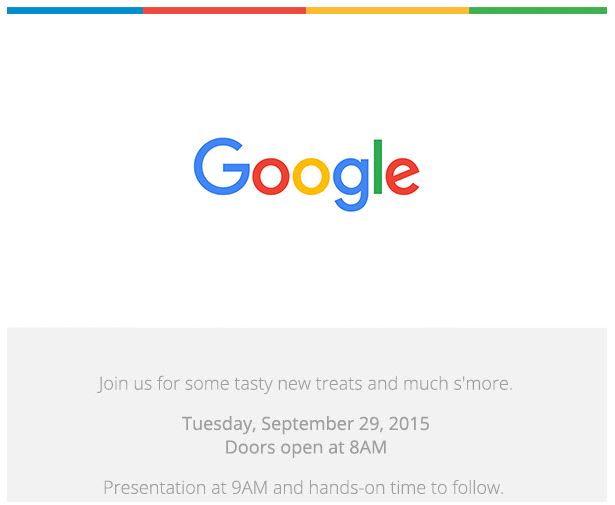 Above: The invitation for Google’s September 29 event in San Francisco.

The invitations come after a report of a Google event on Sept. 29 in San Francisco and hints that the company is planning to show off new Nexus smartphones, one from LG, the other from Huawei.

If that’s what Google will indeed be unveiling at the event, it will be good timing — Apple started taking pre-orders for the new iPhones last week.

But Google will also be able to showcase the final version of Android Marshmallow at this event — hence the “treats” mentioned in the invitation. It’s also possible that Google will show off the rumored second generation of its Chromecast media streaming device.

It’s important for Google to show all these new gadgets — and perhaps others — ahead of the holidays, especially given Apple’s splashy event in San Francisco earlier this month, and Microsoft’s event in New York coming up next month, where it will be showing new Windows 10 devices.