As more consumers and businesses take to the cloud for email, file sharing, and other services, Google has been a beneficiary. To handle the load, it’s been building more and more data centers around the world to compute and run it all. So the news that Google is backing off its plans to build a data center in Hong Kong — and instead expand others in Asia — comes as a surprise.

Google — a company that took in almost $3 billion in income in the third quarter of the year — is citing costs and the difficulty of finding enough land as reasons to not build in Hong Kong, according to a Wall Street Journal blog post published today.

That’s remarkable, because Google has raised its profile more and more as a cloud service provider, and China is a critical market for any company.

Sure, some people are worried about cloud security when it comes to Google. Leaks courtesy of former NSA contractor Edward Snowden have only made people think more about security of data in the cloud. Such reflection could affect the use of Google’s cloud services.

And it’s possible that geopolitical issues played a role in Google’s steps back in Hong Kong. Hong Kong is part of China, which has been ensnared with allegations of hacking along with the U.S. (A Google spokeswoman did not respond to a question about that.)

But as a rule, Google’s spending on data center infrastructure has been consistent — and vast.

In the third quarter of this year, cost of revenue — the category that includes Google’s data center operations, among other things — was $5.4 billion, 39 percent of all Google revenue and 21 percent up over that period the year before. While Google doesn’t break out exact operating expenses, cost of revenue gives a hint as to how much the company’s operational expenses — which are probably dominated by data center costs — are increasing. This is what cost of revenue looks like from 2006 right on through to the third quarter of this year: 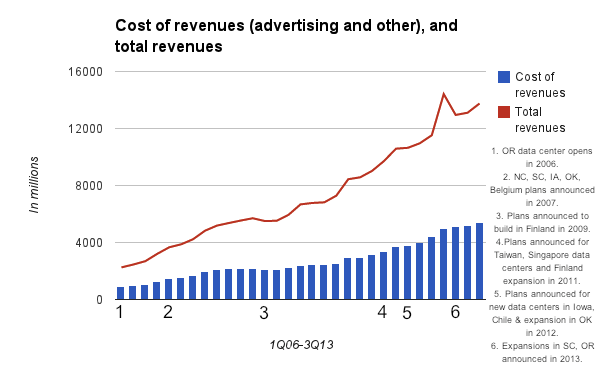 The company currently discloses that it has data centers in 12 sites on three continents. In Asia, sites are in the Jurong West area of Singapore, where Google has bought around 6 acres of land, and in the Taiwanese county of Changhua, where Google has more than 37 acres. Plans for a Google data center in Hong Kong go back to 2011, according to the Wall Street Journal post.

Because Google has been amping up the Infrastructure-as-a-Service flavor of its public cloud portfolio, the company could be in a position to get many more companies pinging its servers to run applications and computing jobs. But more broadly, it seems obvious that as the proverbial cloud grows, so grows Google’s infrastructure. With cloud computing slowly but steadily becoming more popular, Google is likely to keep building data centers. Google itself alluded to that likelihood of continuing infrastructure growth in its most recent earnings statement:

We expect cost of revenues will increase in dollar amount and may increase as a percentage of total revenues in the remainder of 2013 and in future periods, primarily as a result of increases in traffic acquisition costs, data center costs, hardware and inventory costs, manufacturing and inventory-related costs, content acquisition costs, credit card and other transaction fees, and other costs.

And because high-speed service has been a priority for Google product managers over the years, it’s not hard to imagine that one day a Google data center could be located in every country, or every other country. Google’s got the money and the demand, so while a Hong Kong data center might be off the roadmap for the immediate future, it will probably open someday.