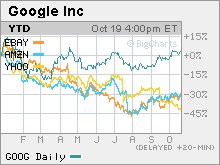 Now the guessing game begins when Google will trip up.

Hewlett-Packard is reeling from a spy scandal on its board. Intel is suffering form a major onslaught from AMD. Cisco desperately wants into video, but can’t shed its “Internet pipes” brand image overnight. Internet companies like Yahoo and eBay are offering no excitement, and their stocks are down steeply this year (see graph). Even Apple, which is seeing solid Mac and iPod sales, is suffering under the cloud of its chief’s problems with a stock option backdating investigation.

And then there’s Google, which has surpassed analysts’ earnings expectations for seven of eight quarters since going public.

Today, Google announced profits had almost doubled in the most recent quarter compared to the same quarter last year — amazing for a company its size.

And eMarketer.com estimates Google will account for twenty-five percent of all online ad revenue this year, increasing 65 percent from last year, even as competitor Yahoo grows only 17.5 percent.

Google chief executive, Eric Schmidt attributed the company’s growth to its unusually high level of investment in research and computing equipment, as cited by the Times:

“In our model, the capital investments we are making give us differentially better service quality, better scale and better leverage,” Mr. Schmidt said. “And we intend to continue this.” Google spent $313 million for research and development in the quarter, up 76 percent from a year ago.

Yahoo struggles to muster up the $1 billion price that social networking site, Facebook, is apparently demanding from it. But Google could buy social networking site Facebook about ten times over from the value created by Google’s stock price rise today alone (1.6 percent increase during the day, and 7.5 percent in after-hours)

Yes, Google is formidable. The network effect has kicked in big time. We remember thinking that about Yahoo in 2000, when that company could do no wrong. A year later, Yahoo was in shambles, reeling from the downturn in advertising….