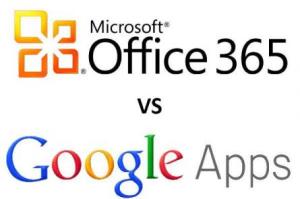 On the day before Microsoft’s Office 365 launches, Google has taken steps to preemptively keep customers from choosing 365 over Google Apps. In a blog post, Google Apps Product Manager Shan Sinha listed four reason Office 365 was a weaker offering than Apps. Google’s reasons included a higher price and a product apparently not designed for teams.

Microsoft Office 365 is a cloud-based service that’s similar to Google Apps and Zoho, which gives users the ability to collaborate on documents, spreadsheets and e-mail using a combination of subscription desktop software and web apps. Google started its actions against 365 last week when it announced integration between Box.net and Google Apps.

Google knocked 365 as a product built for individuals rather than for team collaboration. It pointed out that users must buy individual licenses to collaborate, where Google Docs only requires a Google account to access. “With Apps you can work with multiple people in the same document,” Google’s Sinha writes. “There’s no need to worry about whether or not it’s possible to share a spreadsheet, or co-edit a presentation. You can see people type in real time, and share a file in just two clicks.”

Another chief complaint is that Office 365 is optimized for Windows PCs and devices instead of working equally on all platforms. Google claims to support almost any device or operating system with Apps.

Those who care most about pricing will be interested Google’s point that Apps is always $5 per user per month, while Office 365’s minimum fee is $6 per user month and increases depending on which plan is selected. “We have a single, transparent, low price that meets everyone’s needs, and it hasn’t changed in 4 years,” writes Sinha. “No extras for basics like phone support and robust productivity apps. No long term contracts or opaque enterprise agreements.”

Finally, the last major criticism Google has of 365 is that Apps is built for the web while 365 is meant for the desktop. “You can’t just take legacy, desktop software, move some of it to a data center and call it ‘cloud,'” Sinha writes. “Apps was born for the web and we’ve been serving hundreds of millions of users for years.”

While I see why Google is trying to get ahead of 365’s push with some relevant criticisms, it may still prove hard to convince users who have used Office for 15 years to make the switch. I’ve also talked to a several business users that use Excel frequently who have complained about lack of spreadsheet features in Google Docs.

What do you think about Office 365 and Google Apps? Do you plan to give Office 365 a try?