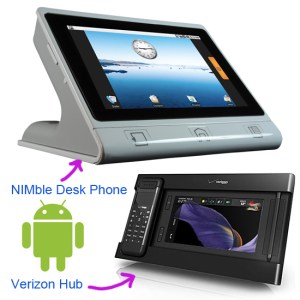 One reason the tech industry got so excited over Android was its potential to evolve. While the open source software platform debuted on T-Mobile’s G1 mobile phone, the industry often speculates about its use on other devices. Now, a source within T-Mobile says Android is poised to become a home phone as early as 2010.

According to internal documents procured by the New York Times, T-Mobile and the Open Handset Alliance (which officially owns the Google-developed Android software) are working together on the device, which is whimsically referred to by some as the “Android Hub.” In addition to offering traditional phone service (ala Verizon’s Hub), the phone will run on Android’s operating system and utilize applications to supply rich internet features — including weather status and RSS feeds.

In terms of architecture, the document describes the phone as sporting a seven-inch touchscreen, along with a base station that handles data synchronization and recharging for the handset.

Even though Google built Android for use with multiple devices, the New York Times suggests the Android Hub is part of a T-Mobile initiative to connect every device in the home:

T-Mobile shares in this grand vision of more sophisticated devices in the home. For instance, its line of Cameo digital picture frames can receive new photos sent via e-mail or from cellphones. T-Mobile would like to link phones, photo frames, digital cameras, security systems, webcams and TVs through its software and networking services.

I’m just ask excited as the next geek about the possibilities of the mythical ‘connected home,’ in which a number of web-enabled household devices share information. But even with the announcement of Android finally popping up in household devices, I think it will be a long time before consumers will feel comfortable with the idea of Google-backed software and applications controlling their security systems. Call me crazy, but for every technological advance the company makes, a privacy concern and boycott seems to be right around the corner.