Jaiku, the popular service that lets you blast short blog updates to friends about you’re doing, has been snapped up by Google for an undisclosed amount.

Jaiku, based in Helsinki, Finland, has been a fierce rival to Twitter, a San Francisco company that is a favorite among the Silicon Valley digerati. During the summer, Jaiku picked up users almost as quickly as Twitter lost them, leaving the latter with only a marginal lead over Jaiku, according to comScore statistics.

Both services have enjoyed the success of a micro-blogging fad that caught on in spring. Jaiku today said it has closed its service to new users, noting that it wants to “focus on innovation instead of scaling.” According to Jaiku’s blog, Google engineers will be assisting the company in rebuilding the new service. Closing services to new users is something Google has done quite often. It did the same for a wiki company, Jotspot, for example.

The fact that Google appears to have bought Jaiku instead Twitter, whose founder also started up Google’s Blogger, is notable. Although Twitter was first to the micro-blogging scene, more than one startup has since encroached on its territory; besides Jaiku, the most successful example is Pownce, co-founded by Kevin Rose.

The possibility that Twitter turned down an offer from Google is cast into doubt by the traffic statistics mentioned above. A three-to-one lead held by Twitter over Jaiku in June had narrowed to a 37% lead by August, as Jaiku almost doubled its user base and Twitter shed close to 100,000 users (see graph at bottom).

A more likely scenario is that Twitter, which has raised venture capital funding from Charles River Ventures, Union Square Ventures and others, held out for a higher price from Google due to pressure from their VCs, making the search giant turn to a smaller competitor.

Twitter also has its own plans, with an open API already available to developers. Co-founder Biz Stone told us that projects on the API are bringing in ten to twenty times as much traffic as the site itself. “Momentum is strong right now and we’re really focused on building a company and culture around the idea of Twitter,” he said in an email, but also declined to comment on whether Google had approached Twitter.

Update: The purchase price may have been $12 million, although our only source for this so far is Valleywag. 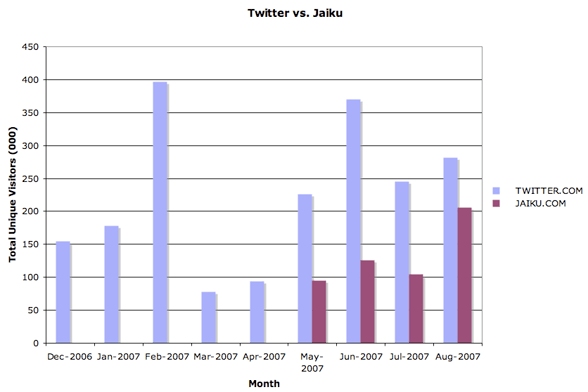