Google has launched a new experimental Chrome extension that lets you transmit the URL of a website to other nearby computers using nothing but sound.

To try the feature, all computers must first have the Google Tone Chrome extension installed and be within reasonable earshot of each other. Then, when you’re on a webpage you’d like to share, hit the little Google Tone tab in your browser and you’ll hear a little succession of beeps — not too dissimilar to an old ZX Spectrum computer loading a game. Nearby machines receive a notification with the sender’s Google profile and picture embedded within the message, and the user can choose to open the URL on their own PC. 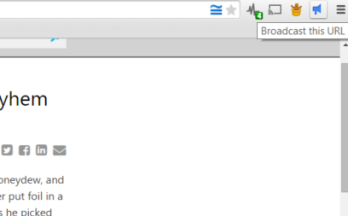 The first version of Google Tone was built in an afternoon, according to Google Research blog post. And although its basic use for now involves sharing simple URLs, the underlying technology could perhaps be adapted to transfer any kind of files.

While there are already a multitude of methods to share files around the world, from email and instant messaging to Dropbox, sharing things with those in the same room could be easier and more direct.

Indeed, just last week we reported on a London-based startup called Chirp which enables file transfers between users using simple audio. The transfer seems instant, works with images and videos, and the service has its own native apps on iOS and Android. Coincidentally, Chirp has just launched a Chrome extension too.

Chirp’s underlying technology is all a bit of a smokescreen to what is going on behind the scenes. No file is actually sent peer-to-peer, and no data travels via sound clips. Chirp merely encodes the file, with the associated sound serving as the delivery mechanism. The file is actually uploaded to Chirp’s servers and a URL generated in real time that is shared with the recipient device and decoded by Chirp. The process from sending to receiving is seamless and near-instant.

Google Tone uses a similar technology to transfer data between machines, so it could in theory expand the technology over time and make it more of a cloud-based file-transfer service. It’s well suited for certain situations and bypasses the need to “pair” devices or enter email addresses. It’s not only an effective means of sharing data with multiple machines in the same room, but also over broadcast networks such as radio — Google confirms it works over Hangouts too.

It’s still an early-stage prototype, though, and isn’t without its flaws — background noise can interfere with it, and machines located too far away may not pick up the beeps. But Google says that “small teams, students in classrooms, and families with multiple computers” may find a use for it.