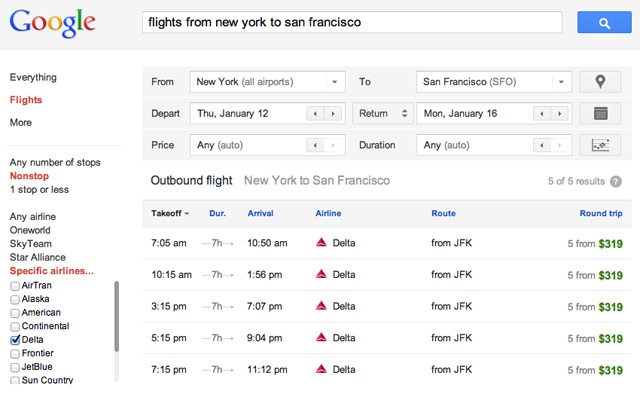 Peak holiday travel may be near its end, but the battle for online travel search is just heating up, with Google’s recently launched flight search tools angering competitors.

Google debuted its flight search tool in September and starting placing its own flight search results at the top of regular searches in December, just in time for the holiday travel season. The flight results pop up when you type a query about trying to get from one place to another, like in my example in the screenshot above.

Competitors such as Expedia, Priceline and Kayak are unhappy about Google’s move, according to the Wall Street Journal. The paper suggests that competitors believe Google is abusing stronghold of the search market to control the $110 billion online travel industry.

Web analytics firm Compete says travel sites rely on Google for 10 to 20% of their traffic, so any time Google places its results at the top, it’s likely taking traffic and sales away from online travel sites. Because sites like Expedia and Orbitz charge airlines a fee for reservations, airlines prefer customers who book direct from their own web sites. Google redirects straight to airline reservation sites rather than linking to online site results. Kayak includes results to airline sites, Priceline, Expedia, Travelocity and Hotwire.

Google’s flight search is powered by ITA Software, which Google finished acquiring in April. When the travel search tool from ITA first launched, we suspected it could also inflict damage on Bing’s robust travel search features.

In the past, Google has faced antitrust allegations over its control over web searches and web data. Just recently, the European Commission met with Google chairman and former CEO Eric Schmidt to talk about the company’s unfair advantage in online search.

Kayak especially may have been hurt by Google’s move into travel, as it filed its IPO paperwork with the SEC back in Nov. 2010 but has not gone anywhere since. In Nov. 2011, the company reportedly said it was simply waiting until markets were favorable, but other factors like competition from Google could be in play. Kayak is backed by the likes of Sequoia Capital, Accel Partners and General Catalyst Partners.

Kayak, Expedia and Orbitz were not available for immediate comment, but we will update this story if any decide to clarify their positions further.