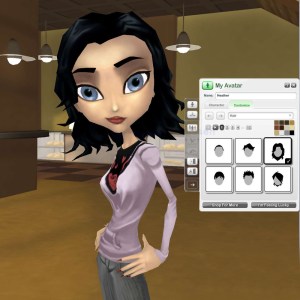 Google is going into the virtual world business today as it unveiled “Lively by Google,” a product that lets users create highly personalized 3-D virtual rooms on the web. Users can create their own custom characters, or avatars, and interact with friends through text chats or animations.

The long-awaited move has been expected by rivals such as IMVU, Habbo, WeeWorld, and Gaia Online — all of whom offer virtual rooms and avatars targeted at young people. Lively by Google users will be able to embed videos or photos in the walls of their rooms. And the Lively rooms themselves can be embedded on a blog or web site with just a snippet of code. It will also be a Facebook application.

When Google moves into a new market, it’s a blessing and a curse. The small start-ups in the market can welcome the validation of their space. But then they have to watch out for some serious competition. In this case, Google signaled its interest early.

In 2005, the company made a secret bid to buy IMVU. The company turned Google down. The search giant did manage to hire one of IMVU’s five founders, Mel Guymon. Rivals such as IMVU and Gaia Online — which we wrote about here and here — have head starts with millions of members, but Google has a lot of marketing power to ease its entry into the market.

Niniane Wang, an engineering manager at Google, wrote in a blog post that she started working on the idea as a “20 percent project,” or one that Google employees are allowed to do even though it has nothing to do with their direct jobs. In contrast to worlds like Linden Lab’s Second Life, Lively by Google is available on places people already visit on the web, Wang wrote.

Update: Cary Rosenzweig, CEO of IMVU in Palo Alto, Calif., said that Lively by Google is much more squarely positioned against IMVU, no doubt due in no small part to the fact that one of IMVU’s founders is leading the Google effort. He said Google’s move does indeed validate the virtual world space and that the metaphor of the room makes Google’s effort much more akin to IMVU than Second Life. He thinks the category will be big enough for more than just one company; meanwhile, he notes that IMVU has 20 million registered members and 1.7 million virtual items for sale.

Google could have created its own world like Second Life, but that represents a huge artistic undertaking and requires a lot of server infrastructure. Virtual rooms, on the other hand, don’t have to be linked in a world and are therefore much more contained in terms of required art work and computing power. In this case, the users themselves will be creating all of the art work.

The ecosystem around this promises to be big. San Francisco-based Rivers Run Red announced today that it is going to help with some of the art for the 3-D spaces. And San Francisco virtual world marketing agency Millions of Us has also just launched a project in which it is taking the National Geographic Channel’s “L.A. Hardhats” TV program into Lively by Google.

Prior to the release of Lively by Google, the company was working closely on the virtual world project with Arizona State University. My guess is this is one way that Google is going to expand its advertising business.  A year ago, it bought Adscape, which makes it possible to insert ads into game worlds.