A beautiful screen, phone-like cameras, and the ability to switch from a tablet into a laptop using a detachable keyboard — those are just three of the key selling points of the new Pixel Slate, announced today at the Made by Google event in New York City. Heavily leaked before its announcement, Pixel Slate represents Google’s latest attempt to challenge Apple’s iPad and iPad Pro lineups with a Chrome OS device designed “for life at work and at play.”

Available in “midnight blue” aluminum with a Corning Gorilla Glass 5 face, Pixel Slate was unveiled as part of a complete Google product family alongside new Pixel 3 smartphones and a Google Home Hub, matching previously leaked images and specifications. The form factor will instantly be familiar to anyone who has seen tablets and smartphones evolve over the past eight years: a 12.3-inch rounded rectangle with a 3:2 aspect ratio LTPS screen (the “Molecular Display”) at a 3,000 by 2,000 resolution.

That’s 6 million pixels at 293 pixels per inch, albeit within thick black bezels inside a 290.9mm by 202.0mm by 7.0mm enclosure weighing 1.6 pounds. The bezels have enabled Google to include a collection of computer-class features. A fingerprint scanner on one long side provides security authentication, while the opposite long side has volume buttons and keyboard connector pins. Pixel Slate also promises robust anti-virus protection, including the company’s Titan chip for hardware security, and the ability to automatically update Chrome OS in the background against threats. 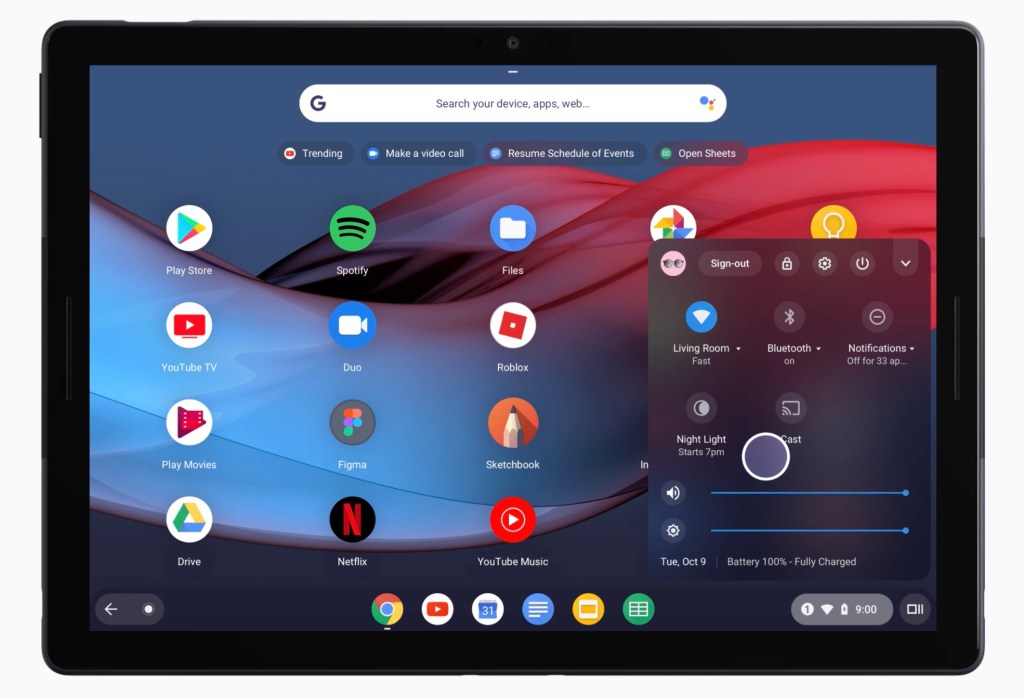 Front-firing stereo speakers are built into the bezel’s short sides, while the edges hold two USB-C ports that enable Pixel Slate to offer more connectivity than Apple’s iPads, or even the 12-inch MacBook. Battery life is said to be 10 hours — the 48-Watt-hour cell “keeps up with you all day” — and you can get two hours of battery life off a 15-minute quick charge.

Processing performance shouldn’t be an issue for the Pixel Slate, at least, if you opt for something other than the base model. All versions use Intel chips, but vary dramatically in CPU specs, RAM, and storage.

Google chose new, roughly smartphone-class cameras for the device: The same 8-megapixel front-facing Sony IMX319 sensor found in Asus’ ZenFone 4 Pro offers an f/1.9 aperture, 1.4μm pixel size, with a wide field of view and 1080p/30fps recording. On the back, Sony’s Exmor RS-class IMX355 also offers 8-megapixel resolution, but with a faster f/1.8 aperture and larger 1.12μm pixel size that will be better for low-light photography. The Google Camera app can be used with both cameras, including support for the computational photography-assisted Portrait mode.

Google also showed Pixel Slate Keyboard, a detachable keyboard case that features circular backlit keys, notably including dedicated Assistant and control panel keys in the top row. It also supports trackpad input as an alternative for direct screen touches, and when not in use as a keyboard, it can serve as an “infinitely adjustable” stand for Pixel Slate. Weighing 1.1 pounds on its own, it brings the total weight of the Pixel Slate up to 2.7 pounds.

On the software side, Pixel Slate supports millions of Android apps, and Google says that Adobe has created a Pixel Slate optimized version of Acrobat. The device will run Chrome OS 70, which notably includes both Android Pie and Linux app support; despite recent collaborations with Microsoft, the company did not address pre-event rumors of dual-boot support for Windows 10. A color-matched version of the Pixelbook Pen provides capacitive stylus input support.

Pixel Slate is bundled with a power adapter, USB-C charge cable, and three free months of YouTube Premium. In addition to the tablet variations, the Keyboard is sold separately for $199, and the Pixelbook Pen sells for $99. They will be available “later this year” at retail stores, and a waitlist for ordering is available on the official product page.