The announcements were made at the third annual Firebase Summit in Prague, where Google also noted that over 1.5 million apps are actively using Firebase every month. All of today’s updates are aimed at helping enterprise developers build better apps, improve app quality, and grow their app business.

Firebase’s free support will remain unchanged. The paid support option will have guaranteed SLAs, 24/7 support for critical impact issues, target response times, a dedicated technical account manager (if you are enrolled in Enterprise Support), and the option to have Firebase questions answered through Google Cloud Platform support.

Google is expanding ML Kit’s Face Detection API with the beta launch of face contours, letting developers detect over 100 detailed points in and around a user’s face. Face contours lets apps handle tasks like overlaying masks and accessories on facial features (ears, eyes, nose, mouth, and so on) or adding beautification elements, like skin smoothing and coloration. Google launched ML Kit for Android and iOS developers at its I/O developers conference in May. ML Kit is supposed to make machine learning easy for all app developers, whether you’re using its APIs or bringing your own custom TensorFlow Lite models and serving them through Firebase.

Google has released the Firebase Management API, a REST API that lets developers create and manage projects and apps programmatically. That means you can create and destroy Firebase environments as part of your existing developer workflow.

Furthermore, partners can build new experiences on Firebase. Two already have: You can now deploy to Firebase Hosting directly from within web-based IDEs StackBlitz and Glitch — their platforms will automatically detect when you are creating a Firebase app and show a “Deploy to Firebase” button.

Firebase Test Lab for iOS, which launched in beta at I/O in May, has hit general availability for all Test Lab users. Google has expanded the iOS device farm; added support for iOS 12, as well as for older iOS versions; and integrated the UI for iOS into the Firebase console. Developers can now test Android or iOS apps across a wide variety of devices and device configurations and see the results (logs, videos, and screenshots) from the Firebase console. 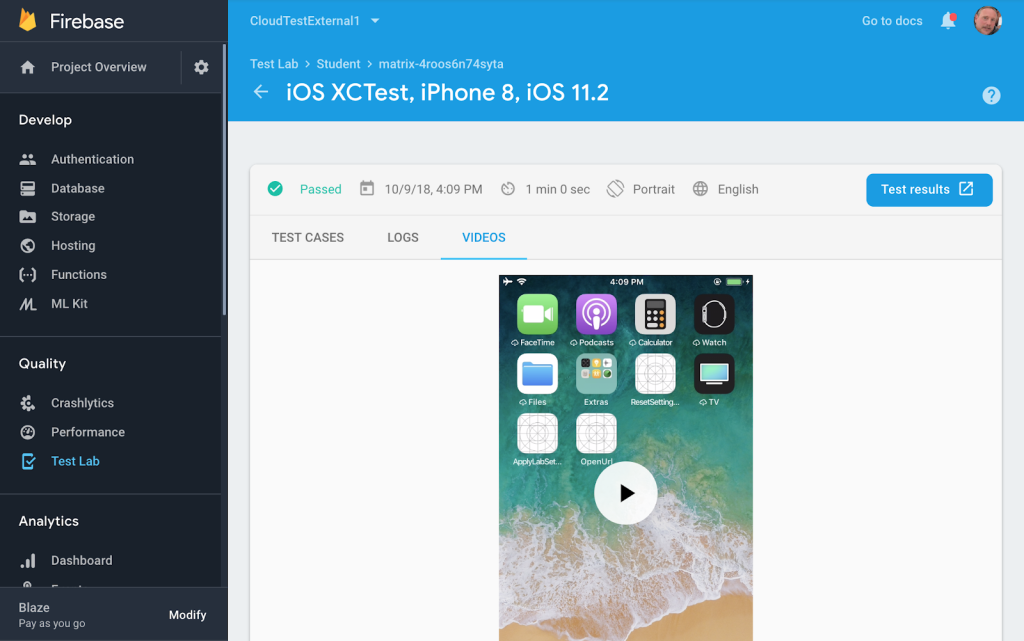 Performance Monitoring gives you insights into bugs and performance issues and automatically surfaces the most critical ones in a given trace instance. Now you can dive into an individual trace session to see exactly what was going on when a performance issue occurred (the dashboard below, for example, shows that CPU usage on the phone spikes after the app fetches and loads a product image). 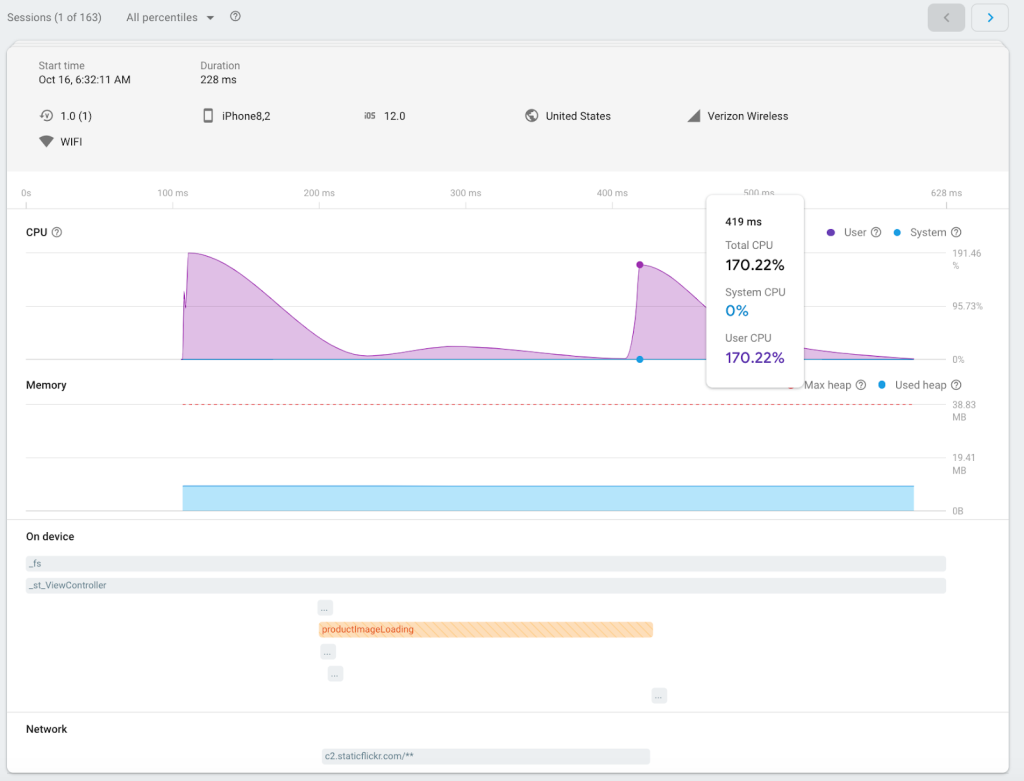 Google has further added the ability to mute, close, and reopen issues in your console. Muting temporarily silences the issue, while marking it as closed indicates that it’s been solved, although Firebase will still notify you if it occurs again.

Firebase Predictions, which applies Google’s machine learning to your app analytics data and creates user segments based on predicted behavior, has also hit general availability. Predictions gives you insight into which segments of users are likely to churn, spend, or complete another conversion event — without requiring any ML expertise. 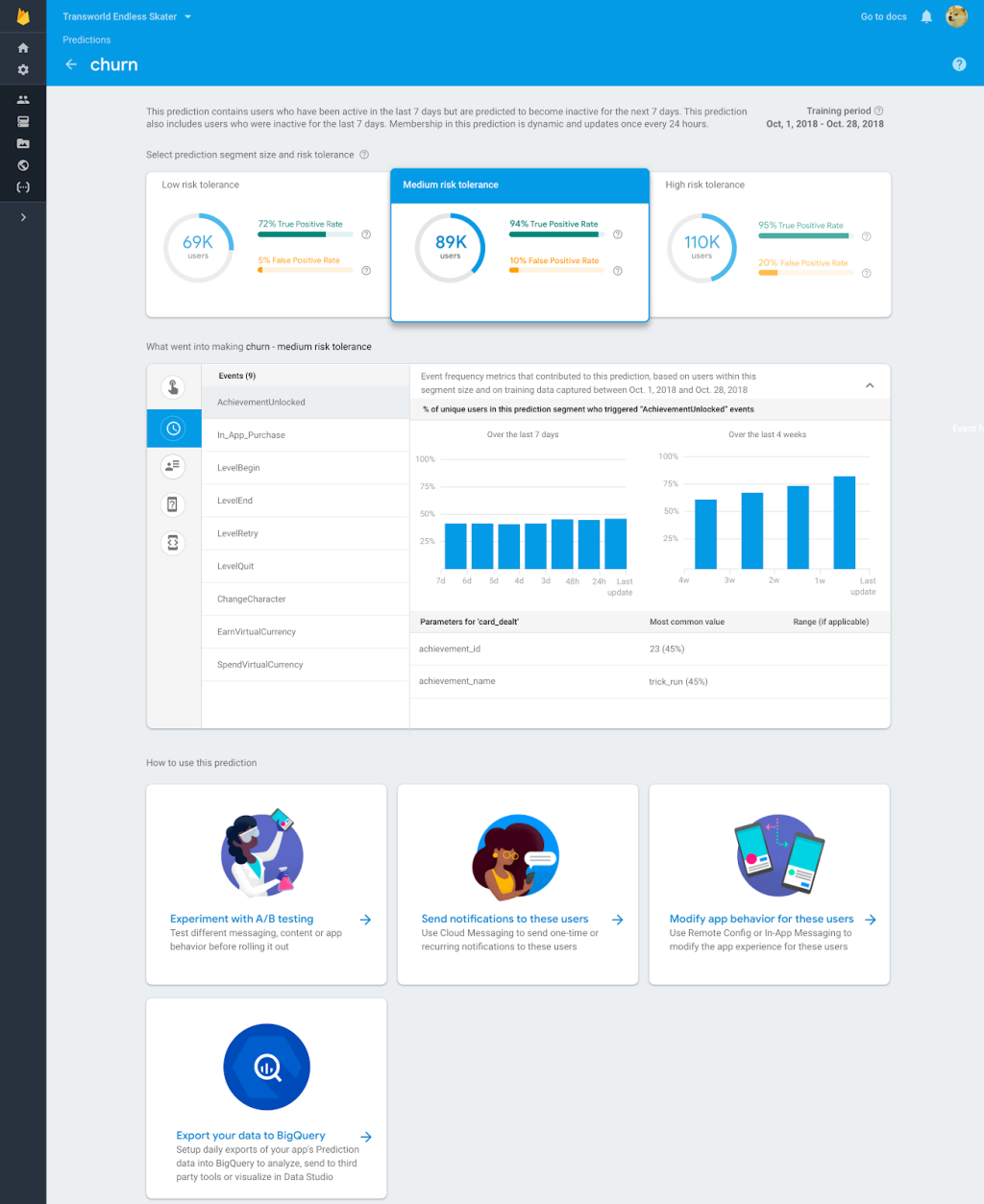 There’s also a new details page that shows you which factors the ML model considered (events, device, user data, etc.) to make that prediction, and performance metrics for each prediction that show you how the prediction has performed historically against actual user behavior. You can export your complete prediction dataset to BigQuery for a deeper analysis or use it in third-party services.

Speaking of BigQuery, Firebase now offers a Data Studio template so you can use it in custom ML models or do a deeper analysis of prediction data and produce a shareable report in BigQuery. You can preview the template with mock data and then customize the report as needed. 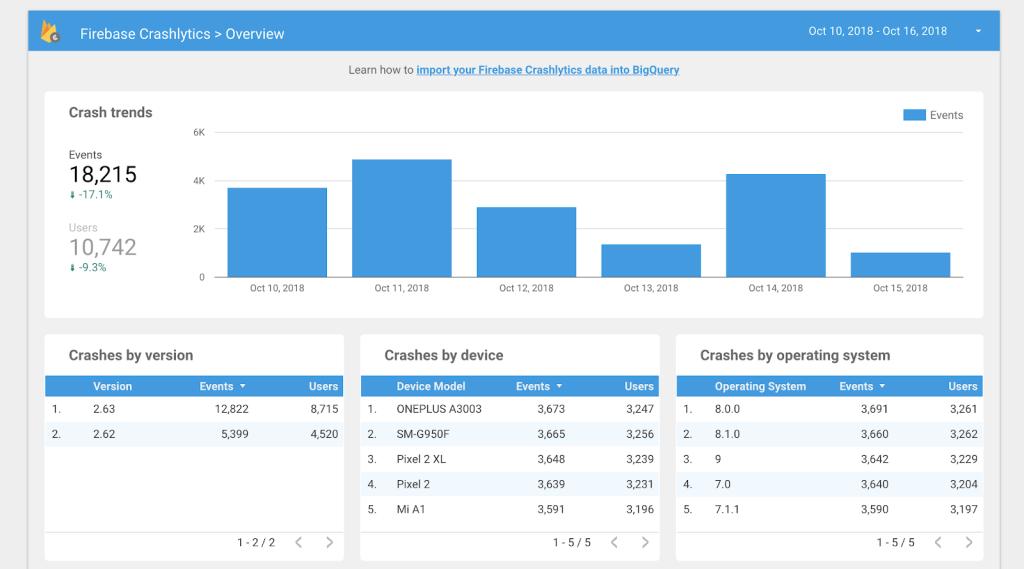 In August, Google integrated Crashlytics with BigQuery so developers can run deeper analysis on your crash data. Firebase was the next logical step.

Speaking of Crashlytics, Google has added a new Firebase Crashlytics stability digest email and a new integration with PagerDuty. The former highlights emerging issues that could become problematic in the future and the latter lets you alert your team about a high impact crash.

Also related to Firebase Predictions is Remote Config, which now integrates with Cloud Functions & Firebase Cloud Messaging so you can notify your apps in near real time when you publish (or rollback) a new config. Remote Config lets developers modify their app, customize the UI, or release a new feature without deploying a new version that could disrupt users. 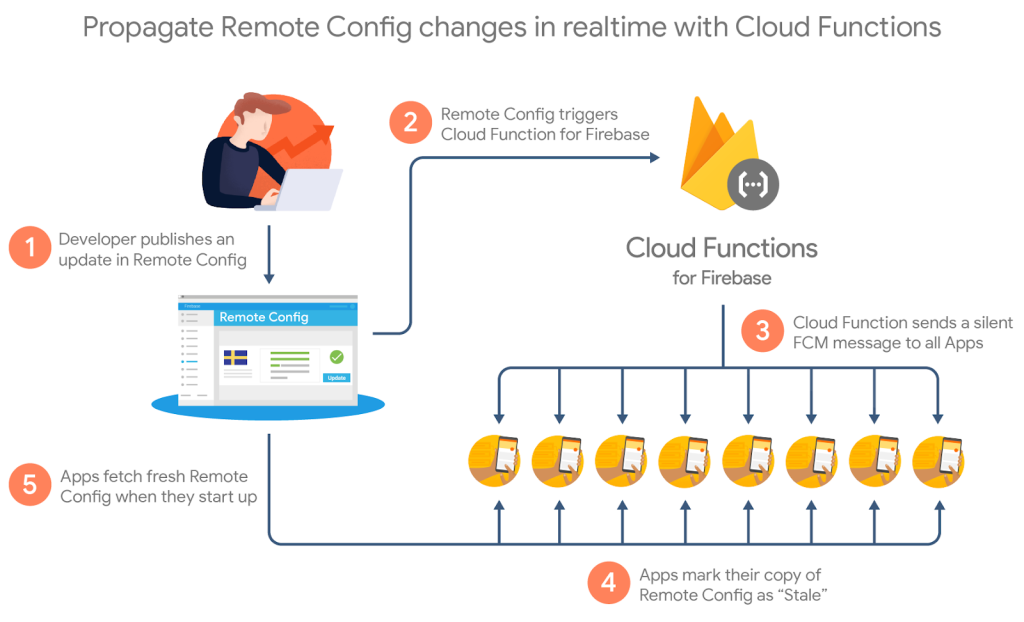 Until now, there was no easy way of knowing when an app’s Remote Config was updated — this update reduces setup complexity and uses less bandwidth on devices because apps only need to fetch when a new config is available. Furthermore, Remote Config can now trigger developer-defined functions when you publish or rollback your config, so you can keep different projects in sync (for development/staging/production environment workflows) and even send Slack messages to your team when a new config is published. Google has created in-console tutorials that walk customers through integrating Predictions with Remote Config and A/B Testing so you can compare how strategies perform when a predictive user segment is targeted versus a standard audience.

Lastly, and also to help with testing, Google has released local emulators for Cloud Firestore and the Realtime Database. These are meant to help you develop and test locally, or even become part of your continuous integration workflow.