After more than a year of being an exclusive invite-only affair, Google today has opened up its Google Voice service to everyone. The news comes after Google began prioritizing college students last month for access to its innovative phone service.

VentureBeat’s Matt Marshall called Google Voice “a killer phone application” in his review of the service. After signing up, users are given a Google Voice phone number that’s intended to last for life. The number can reach any of your phones, and you have the ability to choose where individual callers go — be it your office phone, or straight to voicemail. Google Voice also solves the headache of voicemails by making them searchable, available online, and it even transcribes them for you automatically. Other features include email and SMS (text) notifications, call recording, and inexpensive international calling.

Last fall, Google added the ability to use the service with your existing phone number — although you have to sacrifice some key features like call screening if you do so. The company also developed a powerful web application for Google Voice that works with the iPhone and WebOS devices. A full-fledged Google Voice iPhone app was famously banned by Apple.

It’s a service that would be useful to anyone with a cellphone. As users move across various cellphone carriers and phones, their Google voice number and contacts (tied with their Gmail contacts) remain the same. Losing contacts during a messy cellphone upgrade will become a thing of the past. The amount of control that the service gives users is also unlike anything we’ve seen before.

As I’ve written previously, Google is quickly cornering an entirely new market with Google Voice, which is the result of its purchase of startup Grand Central in 2007. There are similar services available, like Ribbit and 3Jam, but Google still has the mobile advantage. That Voice is directly integrated into Google’s Android mobile operating system — which is growing in popularity quickly — is the real strength of the service and will make it difficult for anyone to compete with it directly.

To put things in perspective, Google has created a helpful infographic that shows how it thinks Voice fits into the history of communication technology: 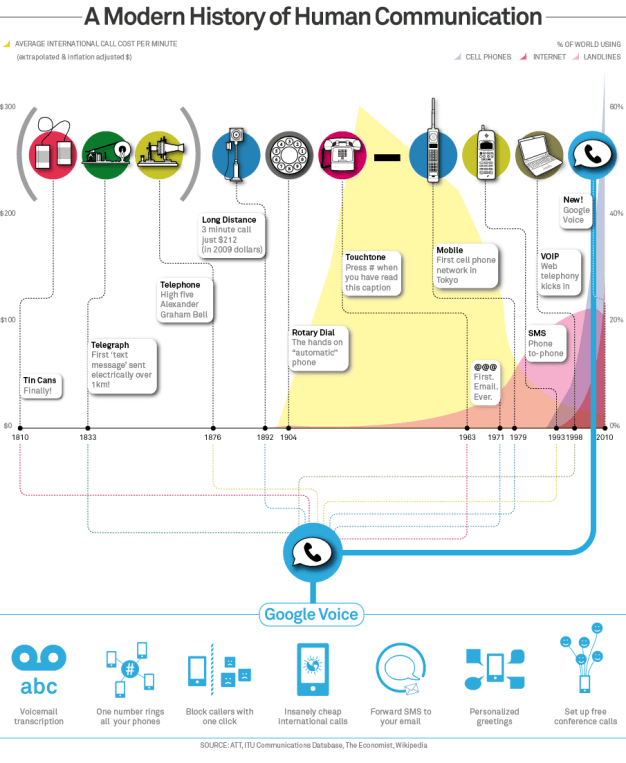