One of Google’s new hardware products this holiday season, the Google Wifi router, is now shipping to customers in time for the holidays. On paper it looks good, and in hand it feels good. In my house, I didn’t think the performance — internet speed and throughput — was very impressive. But the real significance of this product is in the software.

And that makes it a true sibling of the Pixel smartphones that Google unveiled on the same day as the Wifi. The Pixel looks and feels a lot like the iPhone but is more intelligent, thanks in large part to the custom integration of the Google Assistant.

With the Google Wifi, machine learning is indeed on display, just like it is on the Pixels. For example, it automatically connects your device to the band that will be fastest, based on the device’s location, and each router effectively switches to the best available channel in the spectrum to provide the fastest internet connection for your devices.

But the Google Wifi is genuinely interesting and important because it lets you easily do a lot of interesting things with Wi-Fi, which historically has been, well, boring.

In terms of hardware, the device’s most significant underlying technology — mesh networking, which connects multiple routers to amplify the signal throughout a location, such as a home — is available in products from other companies, including the startups Eero and Luma.

The design is what it is — it’s like one hockey puck stacked on top of another, coated in white paint, and then decorated with a narrow multicolor LED panel wrapped around the seam between the two pucks. A little light gray Google G logo is visible on top of the unit.

Like other recent Google devices, it carries a USB-C port, and it’s got WAN and LAN Gigabit ethernet ports. Cables can flow out of the bottom of the router without it wobbling. Wi-Fi can work over 2.4GHz and 5GHz bands. It packs a quad-core ARM chip, an Infineon Trusted Platform Module (TPM), 512MB of RAM, and a 4GB eMMC solid-state drive (SSD). A small button on the back of the router lets you factory reset it. (Just unplug the device, push down on the button, plug the device back in, and keep holding the button for around 10 seconds, at which point the unit’s LED light should start flashing blue.)

This is actually the third version of the Google Wifi that Google has developed internally; it’s been working on the product for three and a half years, product manager Ben Brown told reporters in a recent briefing. Google chose not to release the first version a year and a half ago because performance wasn’t up to snuff, and Google scrapped the second version earlier this year to improve chipsets and the implementation of certain standards, Brown said.

The real power of Google Wifi is in the app that goes by the same name, available for both Android and iOS. From there, you can disable the device’s cloud services, configure advanced Wi-Fi features, change the nicknames of the routers, invite and remove managers, receive updates in the form of cards, adjust the brightness of the router’s light, and run tests.

The app even comes with Google’s version of Speedtest.net, which lets you determine download and upload speeds. I found it to be up to 25 seconds faster than Speedtest.net, but results can differ from what Speedtest.net provides. And sometimes Google’s speed test simply didn’t work. But the app does archive speed test results, which can be helpful. The app also charts how much data you download and upload, and you can break that out by device, if you’d like. 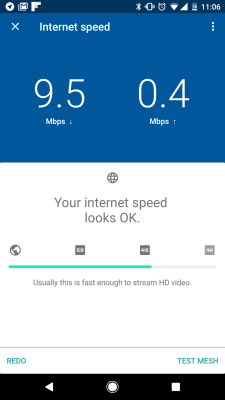 The Family Wi-Fi feature allows managers to “pause” internet connections to one or more devices. Adults can use the feature to restrict online access for children. This is possible on Eero and Luma, as well as on other routers, such as Circle.

Google Wifi also lets you set up and manage Guest Wi-Fi networks. Eero and Luma do, too.

And you can use Google Wifi to manage internet-connected devices such as Philips Hue lightbulbs. Just go to on.here if you’re on the router’s Wi-Fi network and then adjust as you like — in the case of the Hue, you can remotely change the modes and brightness of all connected bulbs. It’d be nice to see Google enhance that website with more of the features that are inside the Google Wifi mobile app.

And if you need the best possible connection on a single device that’s connected to your network, you can mark it as the priority device for one, two, or four hours. You can’t rank other devices by priority, and you can’t permanently set a device as the priority device. Still, it can make a difference: The feature gave me the highest download and upload speeds I saw during all my tests. Think of it as a secret weapon.

If you don’t care about features and you’re reading this, then you probably want to know whether these Google routers really will accelerate your internet speeds.

Short answer: Results may vary. It will depend on your location (size, orientation, wall depth), whether you buy a single Google Wifi unit or a set of three, and what you have now.

I have a modem-router combination box from my internet service provider (ISP), AT&T. For the past several months, I was using a three-pack of Eero routers. Before that, I used a TP-Link OnHub with my modem-router box. Google provided me with three Google Wifi routers, so I tested them against the Eero routers and my modem-router, and I also checked for compatibility with the OnHub. 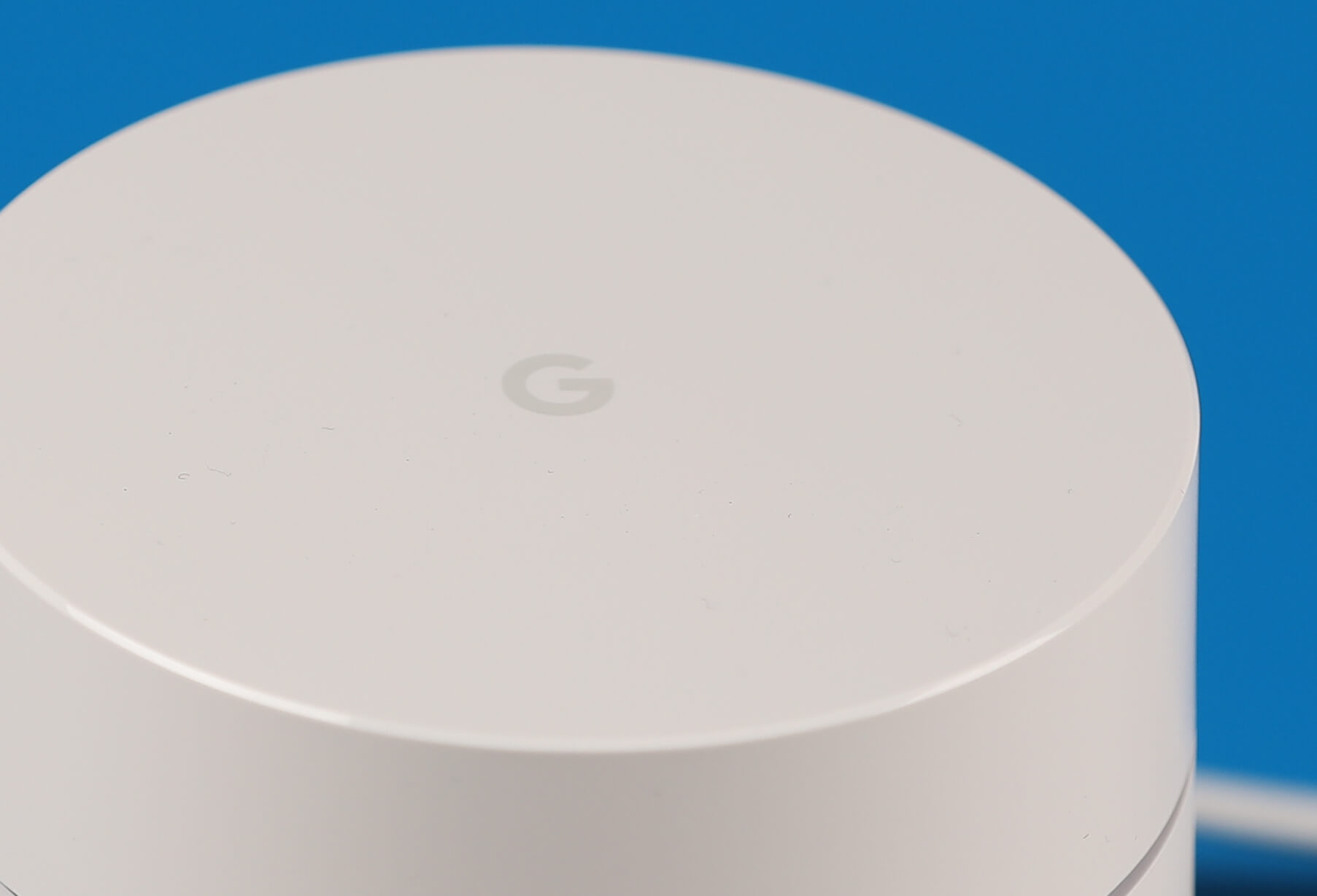 My modem-router provided comparable speeds in the same room, but as I got farther and farther away from it in my apartment, speeds went lower and lower, and that effect was not as pronounced with the Google Wifi setup. This type of testing tells me that mesh networking really can make a difference.

I saw faster speeds when I added the TP-Link OnHub to my network of three Google Wifi routers; it strengthened the signal all around my apartment. I got speeds of up to 11.1Mbps when downloading and 0.94Mbps when uploading, with the fastest speeds in the room where the modem is located.

The Eero gave me speeds that were at least as good as the Google Wifi in almost all my tests.

In the end, you’ll have to figure out if it’s worth upgrading your presumably perfectly functional home Wi-Fi. With its feature-rich app, Google’s product is convenient and easy to use, but its speed might not be the breakthrough that you’re hoping for.

That said, from a sheer pricing perspective, at $129 for a single unit and $299 for a trio, the Google Wifi does undercut the competition, even if just a bit. One Eero costs $199, and three of them cost $499. As for Luma, the difference is far less drastic: $149 for one and $299 for three. I haven’t been able to test the Luma, unfortunately, so I’m not sure if performance is on par with the Google system.

Apple’s AirPort line, which does let you extend Apple networks using the AirPort Express, is showing its age. Apple is reported to be getting out of the router business. And that means there’s an opportunity for a new leader to emerge when it comes to blending simplicity, good performance, and a good price.

Brown said the Google Wifi software will get smarter over time. It will tell you, for example, if you no longer need to have a third Wifi router plugged in because the connection is adequate, he said. If Google does this, and if it comes out with a new version of the product that boasts faster speeds and a lower price tag, then that will be the obvious winner. But until then, what Google has here is a good first stab at improving home Wi-Fi, but not necessarily something everyone needs right now — it’s worth experimenting for yourself to figure out what’s best for your home.