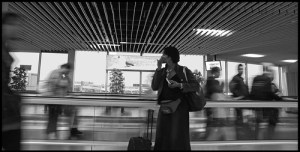 Google one-upped the WiFi offerings of Yahoo and Microsoft this morning, announcing that the company will be sponsoring the WiFi at 47 airports through mid-January, covering the holiday travel season. The list of airports is at freeholidaywifi.com.

There won’t be any new Google Airport technology. Google is simply picking up the tab on WiFi service already offered by other companies — Boingo, Advanced Wireless Group and others.

Google’s official blog post says over 100 million people will pass through the participating airports between now and January 15, 2010. They surely mean 100 million trips, many of them repeat customers, which still means millions and millions of potential users.

Yahoo is sponsoring WiFi for the next year in New York City’s Times Square, which has an estimated daily traffic of 500,000 people, for the next year. The LA Times has the best report, with photos.

Microsoft has already sponsored access at thousands of hotel hotspots nationwide — alas, none of the PR people I talked to wanted to give out the list without approval — as well as airport networks at Denver, Chicago’s O’Hare and others. Users are asked to perform one Bing search in exchange for free Internet use.

These sponsorships have a meaning beyond “free WiFi.” Google, Microsoft and Yahoo are trying to position themselves as gateways to the Internet. But unlike what Gmail did to email, Google hasn’t changed the price of WiFi access to $0.00 as part of a business model. Think of it more as complimentary WiFi snacks for travelers.