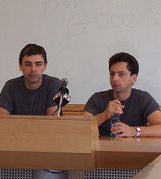 More interesting, though is that both Brin and Page lost some $8.5 billion off of their wealth in Google holdings due to the stock’s tumble this year, according to CNN Money, which did the math. Schmidt lost about $3 billion off of his wealth this past year.

At $450-a-share, Google’s stock is now around $300 off its peak price of $747.24 reached just in November of last year. The reason for the fall is partially due to Google failing to meet lofty expectations set by Wall Street, but likely has just as much to do with the weakness of the economy as a whole as well (our coverage). Many argued that a drop in clicks on Google ads meant big trouble for Google, but that was debunked a few days later (our coverage).

The $1 salaries make for good PR (Apple’s Steve Jobs takes home the same $1 a year) but mean little given how much wealth those in power at Google actually have. Even after the $8.5 billion loss each, Brin and Page are both still worth around $13 billion thanks to their holdings in Google. Schmidt comes in at a more modest $4.3 billion.