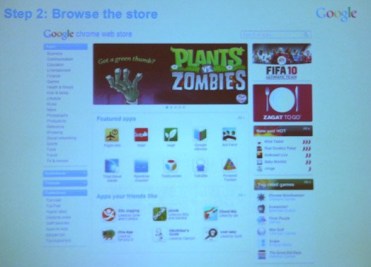 Back in May, we reported that Google was working on an app store for web applications, dubbed the Chrome Web Store. Now we have further details on the project.

Google spoke to gaming press at the Game Developers Conference Europe, where it unveiled further details on the mechanics of the store and announced that it’s “most likely” expected to launch in October, gaming site 1Up.com reports.

The store resembles a web-based version of the iTunes App Store, and unsurprisingly, it will rely on Google Checkout to simplify app purchases. Google stressed how simple it will be for developers to build apps for the store: They simply need to create a web app, build a wrapper for it (icons and metadata), and upload it to the store. The app is then automatically approved and published.

One interesting change is that Google won’t be seeking revenue sharing when the store launches — instead, it’s charging a mere 5 percent processing fee. This is in stark contrast to the iTunes store, where Apple takes a 30 percent cut from every transaction. The move is likely meant to encourage developers to populate the store with their apps. At launch, the store will support both free and paid apps, free trials, subscriptions, and third-party in-app payment methods for microtransactions. In the first half of 2011, it will support currency other than the U.S. dollar and will get a built-in solution for in-app transactions.

Since the presentation was meant for gaming press, Google didn’t skimp on the games it showed off for the store. It showed off Plants vs. Zombies, and Lego Star Wars — both of which are built in Adobe Flash — and discussed the potential for HTML5 games, including the popular strategy game Freeciv.net. The presentation also briefly touched on the HTMl5 version of Quake 2 that some Google Web Toolkit developers ported.

A web app store may seem superfluous for most users — and as Wired’s Chris Anderson might argue, it’s probably contributing to the death of the web. But I don’t think it’s meant for general Chrome users. The web store will most likely sit at the heart of Google’s upcoming Chrome OS — a lightweight web-centric operating system meant for netbooks and tablets. Since Chrome OS won’t have much in the way of local applications, users will need a centralized location to find web-based apps.

Check out a video below of Google game developer advocate Mark DeLoura talking about the benefits of Chrome for gaming:
http://c.brightcove.com/services/viewer/federated_f9?isVid=1