Google has developed an open-source project called the Crisis Info Hub dedicated to providing refugees with important information on their journey to safer countries. When used, it’ll provide information on nearby lodging, transportation, medical facilities, and more in what appears to be a compact way that doesn’t consume a lot of the device’s battery life. 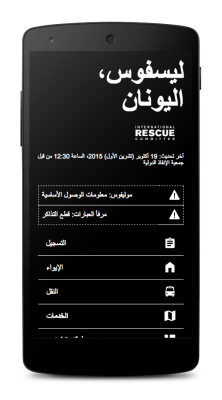 Above: Screenshot of Google’s Crisis Info Hub, which refugees can access for hyperlocal information.

Developed alongside the International Rescue Committee and Mercy Corps, the Crisis Info Hub is currently live in Lesvos, Greece, but there are plans to bring it to more locations soon. Google isn’t the one managing the service, but rather it’s being run by its nongovernmental partners.

In order to make this mobile web-friendly application more accessible, Google has teamed with NetHope to provide access in the most-needed areas.

Jacquelline Fuller, director of Google.org, explained in a blog post that her team has been working with organizations to better understand how they can contribute to help refugees coming from the Middle East, Africa, and other parts of the world receive better treatment. Already Google has helped raise $14 million towards refugee relief, which has been divided equally among Doctors Without Borders, the International Rescue Committee, Save The Children, and the United Nations High Commissioner for Refugees.

The debut of this application comes just more than a week after Google introduced Arabic as the 28th language in its Translate app. Now text can be converted from English and German to Arabic, which should help reduce the language barrier for many refugees.