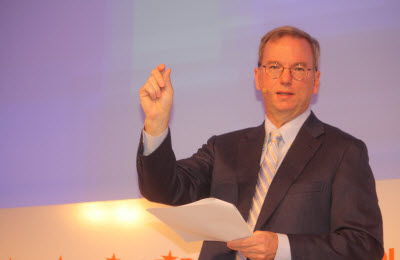 Even as Eric Schmidt steps down as chief executive at Google on Monday, he can leave with the satisfaction that his employee approval rating is at an all-time high. There’s an art to quitting when you’re on top.

Schmidt has an approval rating of 96 percent, up 3 percentage points from a year ago, according to employee approval surveys by Glassdoor.com. Schmidt barely edged out Steve Jobs, whose rating fell 3 points to 95 percent. Glassdoor.com says that its latest survey of employee approval at the top 12 large technology companies yields some insights that aren’t normally measured with the daily ebb and flow of a company’s stock price.

But the top bosses at Yahoo and Microsoft aren’t so lucky, as might be predicted by the companies’ recent performance. Carol Bartz, CEO of Yahoo, saw her employee approval rating drop the farthest among the tech giants, with her approval rating coming in at 50 percent, 27 percentage points below a year ago. Still, Bartz’s approval rating is still higher than the 34 percent that Jerry Yang had as CEO of Yahoo at the time he stepped down.

Steve Ballmer of Microsoft saw a drop from 46 percent a year ago to 40 percent this year. Jeff Bezos of Amazon saw his rating drop to 83 percent from 87 percent a year ago. Larry Ellison of Oracle dropped 4 points to 73 percent. eBay’s John Donahoe rose 22 percentage points to 46 percent, while Adobe’s Shantanu Narayen fell 1 point to 57 percent. Intuit’s Brad Smith rose from 69 percent approval to 87 percent, and Michael Dell rose from 36 percent to 48 percent. Paul Otellini rose 9 points to 90 percent and Sam Palmisano rose 10 points to 57 percent.

Overall, six gained and six lost. That’s predictable in one sense, since tech companies are recovering from the recession but not everyone is benefiting equally from the recovery. Glassdoor CEO approval ratings are calculated similarly to presidential approval ratings. Employees are asked: “Do you approve of the way your CEO is leading the company?”

Glassdoor said it also looked at the company ratings for the 12 tech giants and found only slight changes in their average ratings from employees. eBay saw the biggest increase, while Amazon saw the biggest decrease. The only top exec missing is Leo Apotheker, CEO of HP, but he has been on the job a short time. 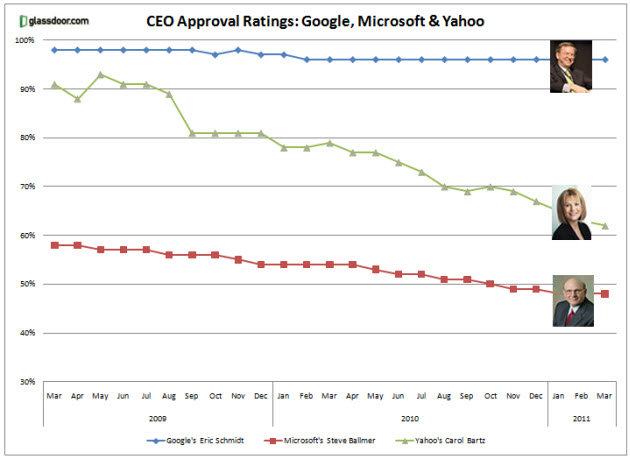 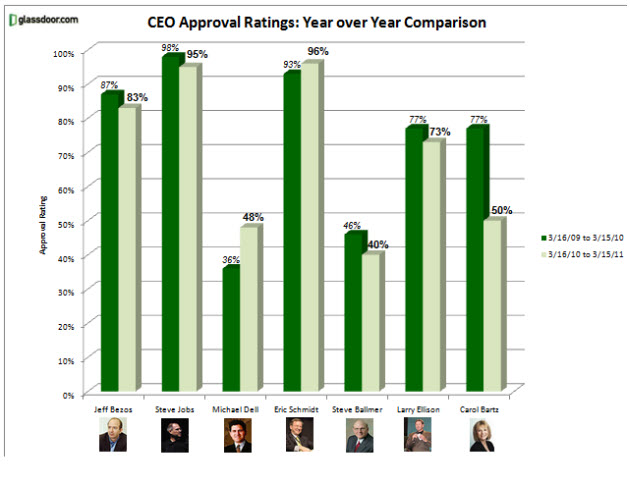