The company that makes the broadband-spreading air balloons for Google’s Project Loon says one of its test balloons has now been flying for more than 120 days.

The company, Raven Aerostar, announced the milestone on its one-year anniversary as Google’s balloon supplier. (Fun fact: Raven Aerostar has also been a U.S. military contractor for eons. Good to know, especially given Google’s vehement denials of tech-sharing and cooperation with the U.S. government and military. End editorializing and insinuations.)

The test balloon, called Ibis 152, was launched from New Zealand on February 26 and has circled the earth twice.

Google wants to launch a fleet of these balloons to fly up near the stratosphere and deliver broadband service to people in rural and remote areas. Google hopes the balloons might fill gaps in broadband coverage areas and bring people back online after disasters. 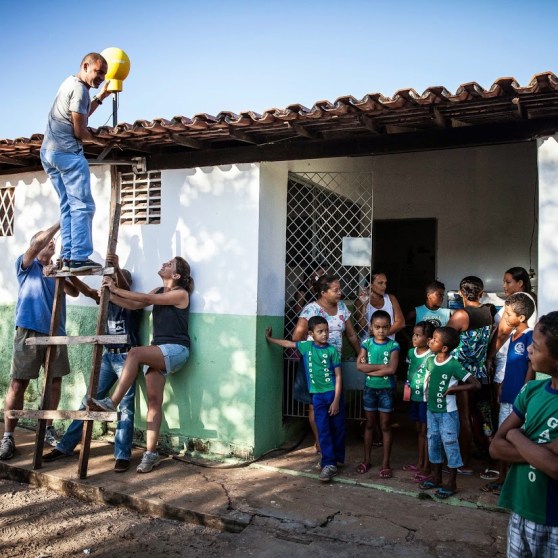 Above: Project Loon team members install a Loon Internet antenna at a school in Brazil.

In the stratosphere, Google explains, there are many layers of wind, and each layer of wind varies in direction and speed. According to the company, Loon balloons go where they’re needed by rising or descending into a layer of wind blowing in the desired direction of travel.

Google also says each balloon can provide connectivity to a ground area about 40 kilometers in diameter at speeds comparable to 3G. For balloon-to-balloon and balloon-to-ground communications, the balloons use antennas equipped with specialized radio frequency technology. Project Loon currently uses the 2.4 and 5.8 GHz bands, which are available for anyone to use.

The 120-day milestone proves that the Loon Balloons can survive the tough conditions of the stratosphere for long periods of time.

Google’s Project Loon also successfully delivered connectivity through a recent demonstration in Agua Fria, Brazil. Over 100 million people in Brazil are not currently connected to the Internet.