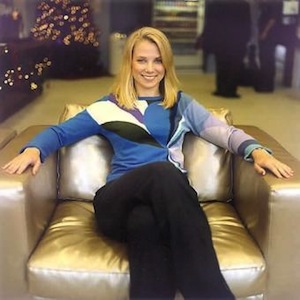 Marissa Mayer, Google’s vice president of search and user experience, mostly dodged questions on-stage today about the company’s future plans, including rumors of some sort of social networking service in the works.

Both Mayer and Google chief executive Eric Schmidt made similar comments at the TechCrunch Disrupt conference in San Francisco over the past couple days. They said Google is working to add social features to all of its applications rather than building a standalone social network. But Mayer also talked about how she sees Facebook, and about whether or not it’s a competitor.

An audience member asked Mayer if Facebook is a competitor in search, especially as it expands its social features beyond the Facebook website. She responded that Facebook is “really different than what Google is really focused on” although there are “elements that are interesting.” Mayer said her concern about social networks, particularly Facebook, was the fact that so much of their content is hidden from Google and other search engines.

“There is a lot of content that is being locked in,” she said. And while some of that content is protected for privacy concerns, “You should still be able to find the information that’s relevant to you, that you would otherwise have access to.”

(Google launched a real-time search engine last year, pulling information from a number of social networking services, but its integration with Facebook was pretty limited.)

Mayer also unveiled some updates to the Google Instant service (which shows you search results as you type), adding support in new countries and expanding the feature to other parts of Google search.