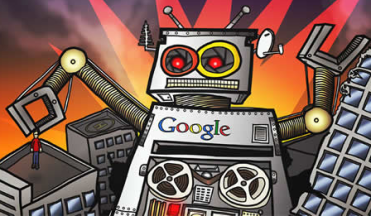 Over the last year, it’s become clear that Google has a bigger mobile war on its hands than it had anticipated. Its principal antagonist is Apple’s sexy Apple iPhone, which has seriously disrupted Google’s ambitions to turn the mobile industry into a Web-based world.

With its iPhone and the App Store, Apple has suddenly made it easy for people to download and install mobile apps. Now other big players are scrambling to follow Apple’s lead: Nokia, Samsung, Microsoft and Research In Motion among them. In the meantime, Google has fired back, with a surprising set of new web technologies that seek to make the Web even more compelling for mobile: By transplanting the richness of the PC browsing experience onto mobile devices, Google may yet have the winning hand. For now, the war wages on.

In some ways, oddly, Google and Apple are fighting together. Even Apple’s rich native applications will need to draw from the Web. Google, meanwhile, says it supports the rush to build rich mobile applications (and its delivering ads within iPhone apps (see top ad in image below). But by tying its apps into a deep integration within its device and operating system, Apple makes it harder for publishers to simply transfer their existing Web content to mobile — and that’s the conundrum for Google.

Google’s past — as well as its present and future — lies on the Web. It has been beating rival Microsoft because it bet big on the Web, while Microsoft has remained tied to high-cost software downloaded to the computer. Google embarked four years ago to start building Android, a new open mobile operating system for phones. Google makes billions by serving ads to the web pages served to your PC Web. Android was designed to help Web sites serve up web versions tailored to mobile phones, so that Google could make money from Web ads there too.

Just a year ago, it looked like Google’s vision would win. But since, users and developers have fallen in love with the iPhone in a bigger way than expected and shifted their resources accordingly. Google can’t as easily dominate advertising there.

Mobile is especially hot right now. Everywhere people are suddenly embracing smartphones, Amazon’s Kindle book-reading device, and other intelligent phones or devices with more intimacy than ever before. Hell, I even tuck my phone into bed with me some nights. It follows that mobile advertising is booming. U.S. advertisers will spend at least $200 million on mobile advertising this year, or 43 percent more than last year, according to studies. Add to that the hundreds of millions more in search ads, subscriptions revenue, virtual goods revenue and other mobile services. True, while ad growth has slowed somewhat in the downturn, it’s expected to resume next year, according to a report by Magna, a unit of IDG — citing the expected addition of Google’s Android phones to the market, which will join the wildly popular Apple iPhone,

However, if you own an iPhone, you may be doing some surfing on the Safari mobile Web browser to check out web sites, but there’s actually a better chance you’ve fallen for some applications built especially for it. Take Facebook’s iPhone app, for example. Launched a year ago, it has 7.5 million users. While that’s a lot fewer than the 30 million users of the mobile web version across all other phones, it’s a huge number considering how small a market share the iPhone still has.

For CBS, a major developer of mobile sports and other content (TV.com, GameSpot.com, etc), there’s just no comparison. The company officially has a “neutral” policy in the Web vs. app debate, says CBS Executive Vice President and General Manager Jeff Sellinger. But it’s the iPhone applications that are winning hands down in terms of user interaction. IPhone apps are seeing anywhere from “five to ten times” the level of engagement by users, he said. And so the iPhone has become a large focus for CBS’ development efforts, even though the number of iPhone users is still relatively small compared to some other platforms such as Nokia or BlackBerry. “That’s where you can push forward in innovation,” Sellinger said. Specifically, he raved about CBS’ March Madness app for the iPhone, which provides live stats at the top of the screen while you watch the game (you simply tap on the screen, and a stats box comes up).

Still, the battle is far from over. Google’s latest move with Android is impressive. Using standard open web technologies, developers can create mobile sites that look and feel almost identical to applications. Google demonstrated that when it launched a new Gmail site for the iPhone and Android using HTML5 and Gears, and aggressive caching. All of this makes the browser experience so much more powerful than the typical mobile sites you’re used to. Impressively, it can be used offline too — you can compose, open and read emails when offline. Google chief executive Eric Schmidt said last month he expected Android to have a “very, very strong year,” saying a number of wireless carriers and hardware makers will be announcing new Android phones by the end of the year. For some, this all means that the battle between Web and App is over. “Both won,” writes Olof Schybergson, chief executive of Fjord, a leading mobile design agency. The distinction is indeed getting lost. For example, music company Imeem built a native application for Android, but that app fetches some web pages. So developers are making decisions on a case-by-case basis: Imeem poured its resources into Android perhaps because competitor Pandora had moved quickly to dominate the iPhone. But the question now is, how quickly can Google get publishers to reform their offerings to work within Android’s browser experience, which requires deeper integration (and thus more work) with the mobile device than traditional mobile Web pages have needed? Google also can’t expect advertisers to be content with the existing state of affairs. Ads on mobile versions of PC web sites just aren’t performing very well. Advertisers require the rich information that comes from user engagement in the apps of the new iPhone and Android devices.

This all still creates significant fragmentation for mobile developers. They have to decide where to pour resources, and those decisions will help or hurt Google. Even Google’s HTML5 hasn’t been accepted by most mobile browsers. Existing browsers such as Java J2ME, Symbian, Windows Mobile don’t support it yet. Gears, too, will have to fight for acceptance. There may be less at stake for Apple. It doesn’t lose if mobile becomes more of a Web world. It just wins more if mobile remains application-centric. Apple is making big money on license fees. This subsidizes other things. And Apple lost the first historical battle, when its closed proprietary system on the Mac was vanquished by Microsoft’s more open and extensible Windows — and software developers flocked to Windows. Could this happen again, as Google offers a more open platform on mobile?

In another twist, Apple and Microsoft are almost allies in some ways: Chris Capossella, senior vice president of Microsoft’s Information Worker Product Management Group (which includes Office) points to the popularity of the Facebook iPhone app as evidence that downloaded applications still provide a better experience than the Web. He’s biased, of course, because that’s been Microsoft’s argument all along when it comes to software on your PC.

Dimitry Ioffe, founder of The Visionaire Group, a creative agency in LA that advises companies where to develop ads for phones, says he’s advising mobile content companies to first make sure they target mobile web (namely, the WAP protocol, which allows a Web page to be reformatted easily to adjust to a mobile screen), because it can reach any phone with a browser. After that, he says, mobile publishers should design a site to run on the Web browsers for specific smartphones (Safari for iPhone for example, and Webkit/Android for Google phones, for example). Only then should companies pour resources into building an application specifically for the iPhone, in part because of the extra cost. And while the iPhone has greater interaction per user, the existing ways to monetize (through Web ads) the mobile web still outweigh that of the iPhone, he says. Still, even after this advice, his customers are “finding it hard to resist,” the iPhone, given its superior levels of engagement, he says. 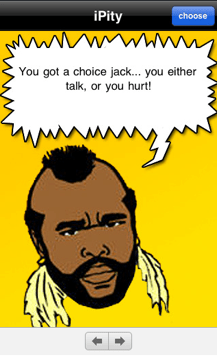 Meanwhile, mobile ad serving companies such as Admob are tilting toward apps, after once having downplayed their significance. Admob chief executive Omar Hamoui was previously quite vocal about how the Web would win. Now Jason Spero, vice president and general manager at Admob, says his company is investing where the users are. And those users are “in apps on the iPhone and they are consuming everything from movie reviews to games to Mr T. soundbites [iPity – check it out],” he wrote me in an email. “Add to this that the app environment enables rich functionality and tight integration with maps, commerce, etc. and ads perform terrifically in apps.” Still, that doesn’t mean apps on Android isn’t changing the game. Admob put its initial development efforts into iPhone apps and is just now turning to Android.

Admob’s Spero says the struggle will play out over the next 3-5 years. “What’s exciting,” he says, “is that the user benefits from the competition, as both offer great mobile-specific data experiences.”

[Note: All of this will be debated fiercely at the upcoming MobileBeat 2009, our mobile conference for industry leaders. Are you an entrepreneur or executive active in mobile? Come participate and network with industry players at Sign up by May 23, and save $145. Sign up fast, as we only have 400 tickets.]