Google said today it will offer a range of new features in its search results, including things like a new navigation bar at the top left side of the home page to things like Google’s Calendar, Docs & Spreadsheets and Picasa Web Albums.

The effort is part of what it calls a move to “universal search,” much of which will be subtle at first, but will change over time.

Many of the changes will begin today (Wednesday). Many of the features, including the navigation bar, still weren’t live as of this writing. We checked with Google, and a spokesman said the changes are still rolling out, and that everyone will see the changes by Thursday morning. The changes were announced during Google’s Searchology event today, which VentureBeat attended.

More significantly, the move is also an answer to a threat posed by a string of other search engine companies, including Ask and Hakia, which are starting to give users clusters of information about a search term neatly on the first page of results — rather than spitting out the pages and pages of results like Google.

Google said that search results will include links to more sources, such as videos, books and blogs and maps. Take the example of a search for Star Wars character Darth Vader. Google said users want info about the character and the actor – not just web pages that mention the movie. Google will deliver search results that include different elements — such as a humorous parody of the movie, images of the Darth Vader character, news reports on the latest Lucas film, as well as websites focused on the actor James Earl Jones – ranked according to how relevant Google thinks they are to the query.

See image below for what we are seeing as of 1pm on Wednesday: 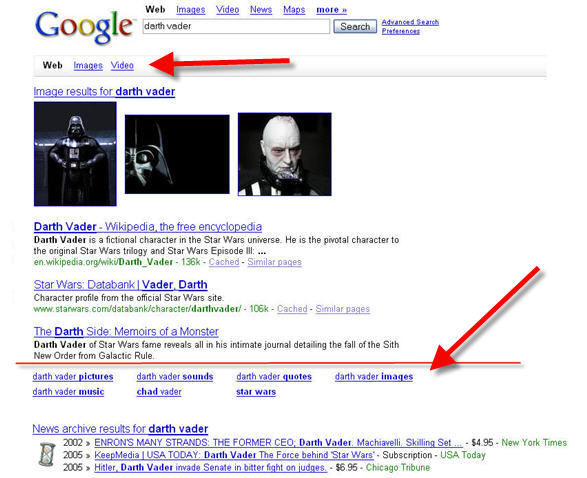 Google said it is introducing a new “technical infrastructure” to enable the intensive computations to produce universal search results — and that it’s upgrading its ranking algorithm to compare the different clusters of information.

Here are the other parts of Google’s announcements today:

New links have been added above the search results — For example, a search for “python” will now generate links to Google’s Blogs, Books, Groups, and Code pages. See below.

Google Experimental — Available on Google Labs, you can use this to search results on a map or timeline. For instance, when you search for “Albert Einstein” you can choose to see search results on a map that shows locations mentioned within web pages about Einstein or on a timeline illustrating the history of Einstein’s life. We don’t see this feature yet, either.

Cross-language search engine — This is coming. Until now, you’ve been able to download Google’s toolbar and you can get translations of words and phrases by scrolling over text. However, this new cross-language feature will be different: Queries will be translated into other languages, and results from other languages will be translated on the fly back into your language of choice.

More videos in Video search — Videos will be pulled from video sites beyond Google Video and YouTube, including for example MetaCafe.