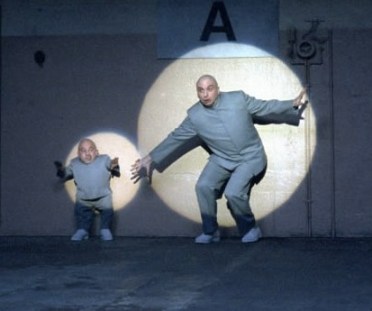 Google’s new Search plus Your World product, announced yesterday, is making a lot of waves. The new search puts content shared by your friends in the Google+ social network higher up in search results than other content —  a move that’s raised antitrust concerns.

Google has had a form of social search in its main results for a while, but this is a significant redesign that gives a lot more prominence to social and to Google’s own social product, Google+.

So is SPYW part of an evil attempt by the “Don’t-be-evil” company to rig search so that it always points back to Google? Or is it a legitimate response to a market need?

Social search has been the Holy Grail of the search business — people have been looking for it since the early days of search.

(Disclosure: I worked on social search when I was at AOL. I’m also an inventor on an AOL patent that may cover parts of social search.)

The premise of social search is simple: Content shared by your friends is more relevant than content shared by random people you don’t know. It also fits the mental model that many use in the real world: When you’re looking for a referral for a plumber or a dentist, you start by asking your friends. If that doesn’t work, you turn to search.

People have been doing a form of social search in a very inefficient way by using Facebook status updates to pose questions to friends. When I’m about to go on a trip, I’ll post a status message asking friends for advice on things to do and places to eat. For each post, I usually get 5-10 responses.

This annoys a friend who works at Yelp, who almost always responds that I should check Yelp instead. But one thumbs up from someone I know is worth a hundred positive reviews from random strangers. I can quickly evaluate the result based on what I know about the responder. If my friend Dariusz recommends a restaurant, I know I can go there without thinking twice because he’s a foodie and our tastes overlap. But I also know to discard the recommendations of another friend whose favorite place is Chick-fil-A.

With SPYW, Google automates this process and makes it instantaneous. Instead of relying on users to actively respond to my request, I get access to all of the previous activity they’ve shared. If a second- or third-degree friend shares content about a topic, I instantly have access to it.

Think of it as word-of-mouth on steroids. In the real world, I might remember the travel histories of 5 to 7 of my close friends. With SPYW, I have access to the travel-related content of hundreds of friends. There’s an ancillary benefit: It helps to strengthen my relationships with those friends because I can discover shared interests.

So SPYW is a great product and represents a very important milestone in search. But a lot of people aren’t happy about it. Luther Lowe, Yelp’s director of business outreach and government affairs, expressed a concern many share when he tweeted:

A quality [review] losing prominence in search for not being published on GOOG’s [Places]  is absurd.

Lowe’s tweet was retweeted by Yelp CEO Jeremy Stoppelman, who was a star witness in September’s hearings about Google and antitrust before the Senate Judiciary Subcommittee on Antitrust, Competition Policy and Consumer Rights.

Google faced that hearing because of antitrust concerns that the secret algorithms it uses to rank search results were manipulating those results to fit the interests of the company. In defending Google at that hearing, Google executive chairman Eric Schmidt told Congress that the algorithmic results are untainted. That is true. But it’s also not a meaningful statement, because no one sees algorithmic results.

Atop and alongside the algorithmic results, you’ll see special content that favors Google products. Queries for stock quotes, maps, products and others highlight this content. 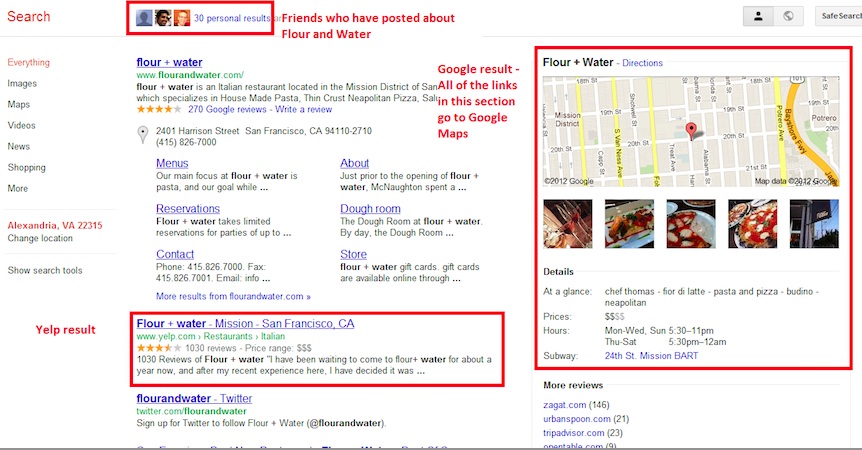 Yelp, which is a top-ranked site for this result and has some of the best local content, gets a fairly standard treatment. Google gets nearly the entire right side of the screen, with a map and pictures.

Schmidt made the argument at the hearings that Google is delivering what consumers want. That’s a fair point — a consumer doing this search would likely want a map, hours of operations and pictures. (In this case, 4 of the 5 pictures that are used are actually from urbanspoon.com, but clicking on the thumbnails takes you to the Flour + Water Google Places page.)

Does Yelp just suck and not have pictures from flour + water? Nope. Pictures are one of Yelp’s greatest assets. For flour + water, Yelp has 232 pictures; that’s 231 more pictures than Google. But you wouldn’t know it from Google’s Web search results.

How do you tell other results from an algorithmic result as a consumer? They’re not labeled. Even experts can have trouble figuring it out. But consumers consider them to be algorithmic results. More accurately, consumers don’t care — they trust Google to be impartial and bring them the best of the Web.

But Google treats its own content with special presentation that other sites don’t get. It  blends in to its algorithmic results content from maps, news and social search. A result from Google Places can take the screen real estate of 6 or 7 algorithmic results.

If you happen to follow an account on Google+ and that person posts content that matches your search term, it will move up in the rankings for you. In the following example, I did a search for “Rick Santorum” and the eighth result is a story by search guru Danny Sullivan. It showed up there because I follow Danny on Google+.

As you can see, Google+ gets preferential treatment here. 7 of the 8 links in this result go to Google+, including the most prominent links. Only one of the links goes to the site that Danny shared. The entire block gets as much real estate as about four standard Google results. The display alone will significantly increase the likelihood of a click.

When I do that search while logged out, that same result doesn’t appear in the first 5 pages of results. That’s a significant disadvantage as many searchers don’t go past the first page.

This creates an incentive for a) people to create an account on Google+ and b) people to share articles on Google+.

These incentives are especially critical right now when Google+ is struggling to gain meaningful adoption. On its own merits, I would not currently recommend to my clients that they spend time on Google+. But because of the potential effect on Google Web search results, I think it now makes sense for many businesses.

As an author, I have long avoided meaningful use of Google+ because it didn’t solve a problem for me. (See my Bloomberg West debate with Robert Scoble about Google+.) But with the launch of SPYW, I’m reconsidering that because I want to be where my audience is — and that’s on Google search.

Google provides enhanced treatment for some links shared on Twitter, but this seems to be reduced now that Google is no longer licensing Twitter’s firehose.

In addition to the explicit incentives that Google creates, there are the implicit incentives created by Google’s black-box ranking algorithms. Legions of SEOs with no inside knowledge Make Shit Up. They advise clients how they can please Google’s algorithm Gods, often by making more use of other Google properties. (Which, of course, said SEOs can assist them with.)

The way Google packages its ad products also means that SPYW will likely let the company help itself to a bigger portion of available ad dollars.

Google bundles several discrete ad products together. In some cases, it is impossible for advertisers to opt out of certain properties that they might not want to buy.

In other cases, Google offers a wide range of other ad products that can be easily purchased with the primary Web search advertising buy. Advertisers can easily buy into the contextual ad network, mobile ads, etc. From an efficiency standpoint, this makes things much easier for advertisers. But the net effect is that Google can take more share of limited advertising dollars.

Ben Edelman, an assistant professor at Harvard Business School, wrote a great analysis of how Google’s practices affect advertisers. That was a topic that didn’t get much consideration in the Senate’s hearings.

So who wins and who loses with the launch of  SPYW?

The clear winner in SPYW is Google+. This level of integration illustrates a commitment to Google+ that many questioned with the failures of Google Buzz and Wave.

Facebook has presented a special challenge to Google. Because much of the content in Facebook is private, Google’s crawlers can’t access it. That’s an important loss of signal. While real people have been sharing quality content on Facebook, spammers have been gaming Google’s results on the Web. SPYW significantly dampens the effects of spammers and has the potential to force Facebook to open some of its content to crawlers.

Yelp, which recently filed to go public, and TripAdvisor, which was spun out of Expedia in December, are both heavily dependent on Google for Web traffic.

On the potential plus side, consumers stand to win if Google’s move finally forces Twitter to build a usable search product for tweets, something it has long neglected.

This post was adapted from a series on Google and antitrust published on Rocky Agrawal’s blog, reDesign.