Silicon Valley is about to get a new drinking game: Spot the autonomous Google bubble car.

The search giant said today that the happy-face cars it designed from the ground up to be self-driving will start testing on the open roads.

“We’re looking forward to learning how the community perceives and interacts with the vehicles, and to uncovering challenges that are unique to a fully self-driving vehicle,” wrote Chris Urmson, director of Google’s Self-Driving Car Project, in a blog post.

Of course, Google self-driving cars have been roaming the wilds of Silicon Valley’s highways and byways for sometime now. But these were Lexus RX450h SUVs that had the self-driving technology added on.

Those cars have driven almost 1 million miles, according to Google. There have only been four accidents involving self-driving cars, and two of them were the result of a pesky old human driving.

Last year, Google decided to build a self-driving car from scratch. These prototypes lacked a few features aimed at humans, like steering wheels, mirrors, and pedals. Google isn’t intending to manufacture these cars, but was hoping to find partners eventually who will.

After testing Bubble Car in its labs, the company will now starting driving it on local roads. The speed is capped at 25 mph. And for now, there will be safety drivers on board with a temporary steering wheel, brake, and accelerator pedal in cases of emergencies. 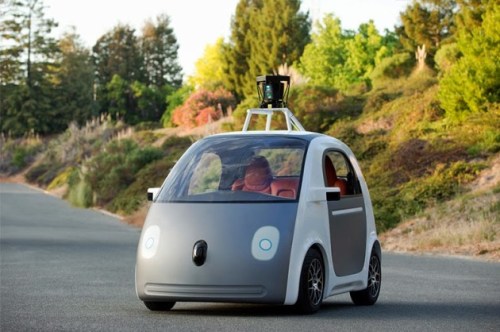 Above: The face of your future overlord is so cute!

Here’s a little video about these dandies from Google: