SAN FRANCISCO — Google has been working hard on its self-driving car, and based on the comments of the Google X designers here at the company’s FORM design conference, that once fantastical notion is well on its way to becoming a real product that people will use and even trust.

No huge surprise there, but the Google car, in its current form, is designed in such a way that the user experience is heavily reliant on a mobile app. Instead of the old paradigm — using a key — people will unlock and start Google’s cars via the app.

The app is also the main mechanism for keeping the user informed about what’s going on in the car’s brain, as well as what the car’s many sensors are seeing outside.

“The prototype is almost entirely controlled by a phone app,” Google X industrial designer Jenny Arden told a crowd of about 200 today. “There aren’t that many systems that entirely rely on a phone app so completely.” She compared it to the app that lets you check in for a flight at the airport, but added that if a flight check-in app doesn’t work, you can still go talk to the person at the ticketing desk to get a boarding pass. 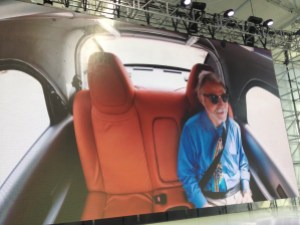 Above: A visually impaired man takes a ride in Google’s self-driving car prototype.

The implication here is that if you can’t access the Google driving app on your phone, you’re not going anywhere.

The Google X design team originally used Lexus cars for its autonomous driving tests, but it eventually designed its own car that would be optimized for all the sensors in the car.

The details of this car, of course, are fuzzy, as Google isn’t talking yet about how the car operates.

But, as Arden said, the Google X design team is working through hundreds of prototypes trying to create a user experience that’s both friendly and safe for the passenger.

Arden points out that the concept of the self-driving car has been around since the 1950s, but the idea of actually building the experience down to the finest detail is a daunting one.

“We are now creating the new experience for it — it’s no longer a blue sky concept,” Arden said. “There are no precedents for this. We prototype every day.” 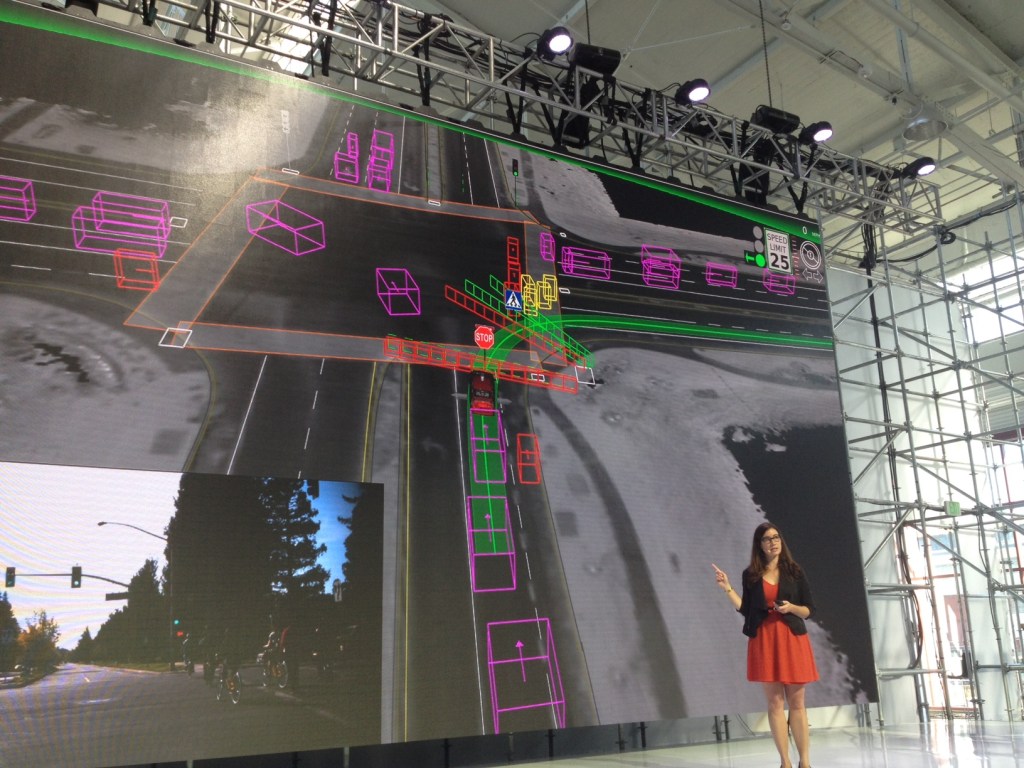 Above: Designer Jenny Arden shows how the Google car’s brain sees other cars and pedestrians at an intersection.

Arden points out that the self-driving car has big cultural implications. For decades, getting one’s driver’s license has been a rite of passage, but that concept might simply go away if autonomous driving takes over.

Judging by Arden’s comments, Google has already taken most of the fun out of driving. “It actually ends up being pretty boring after about 30 seconds,” Arden said. “You just kind of sit back and let it go.”

Arden showed this video, which has been out since May, to demonstrate the point:

Arden herself has no great love for people-operated cars. “I’m a cyclist. I don’t like cars,” Arden said. “In college I was in a major accident, and I actually suffered post traumatic stress from it.”