Everyone’s buzzing about Google’s new TV platform. But the real battle in your living room is Apple vs. Sony.

Over the past few years, Apple has muscled its way past Sony as the top purveyor of premium, high margin consumer electronics products. Sony has long had a deep culture of NIH (Not Invented Here) ranging from Betamax in the 1980s to the Memory Stick in the 2000s. But the iPod replaced Sony’s Walkman, the iPhone replaced Sony Ericsson handsets, and the resurgent MacBook and iPad have leapt past Sony’s Vaio PCs.

Apple’s much maligned Apple TV mini set-top box has long been due for an upgrade. Even Apple executives call the product a “hobby”. The next step for Apple is to start producing actual TVs. A lot of people who live in small apartments or dorms already use 24″ and 27″ iMacs as their primary TV viewing device. This trend has been widely rumored in late 2009 and early 2010 (although I think I was the first to publicly blog about it back in August 2008).

Apple doesn’t actually produce parts like its own display panels. The 27″ iMac screen is manufactured by LG, for example. Display panels, even large ones, are commodities. Instead, Apple specializes in beautiful packaging, excellent integration of hardware/software, and a seamless user experience.

Imagine a stylish, aluminum TV with a lighted Apple logo that comes in sizes ranging from 37″ to 60″. It automatically connects to the Internet and streams all of your iTunes video and audio content. It is CableCARD compatible so you can still get HBO until they finally decide to let you stream it direct. It has an iPod Touch based remote app that lets you easily find content and control the TV. It can easily install apps such as weather, sports, and games just like an iPhone, so your family can play Monopoly together.

Do apps on TVs even make sense?

The TV is the last frontier in Silicon Valley’s relentless drive to computerize every screen. With the price of fully Internet-enabling a screen at below $300, everything that people see and touch is being turned into a computer: mobile phones, billboards, price displays, and with the iPad even magazines, books, and newspapers.

Some say that running apps on a TV is silly. The same people said that running apps on a phone was silly. TVs that can run content apps make a lot of sense when coupled with the trend towards unplugging from cable and streaming all content from the Internet. Apps like Netflix, Amazon Video on Demand, and YouTube are incredibly useful when integrated into a TV. Add to that pulling up the weather, sports scores, horoscopes, and games and all of a sudden apps on TVs make a ton of sense. Most modern TVs already include an integrated computer with chipsets from Intel and Broadcom that run the Linux operating system in order to control onscreen guides and decode digital media signals in real time. So the incremental cost is not that high to add a full fledged platform like Android to a TV.

Many newer high-end TVs already include app frameworks, such as Yahoo Connected TV and Flash Lite. Content companies are likely to only support apps on a few platforms, so Sony needs to partner with a platform that will offer content companies scale, reach, and developer infrastructure. Pictured below, for example, is a CBS app Transpond has delivered running on a Yahoo Connected TV. 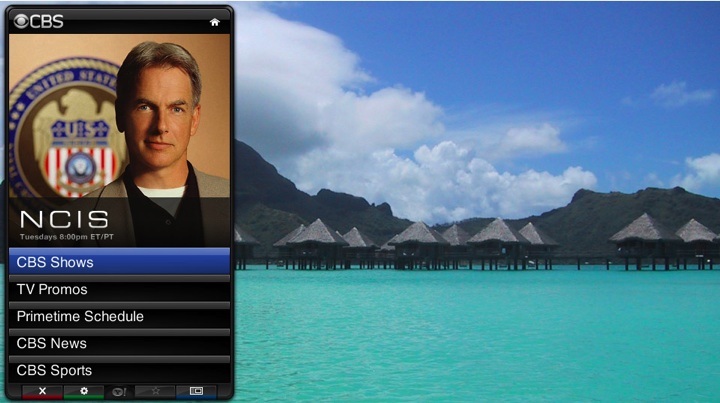 Sony’s Google TV bet
Stylish, high-end TVs is the last consumer electronics frontier for Apple to dominate, and it will make apps as much of a differentiator on TVs as they were on smartphones. In order to survive, existing TV manufacturers like Sony need an open platform with an apps ecosystem, and will flock to Google’s Android TV platform just like existing smartphone manufacturers had to flock to Google’s Android phone platform.

Google, with partners like Intel, Logitech and Sony, is launching a smart-TV platform that fully computerizes TV screens, replacing cable boxes as well as integrating an Android-based app store. Apple has been successful in consumer electronics because it created both well designed products and iTunes — an end-to-end user experience around discovering, purchasing and enjoying music, TV, movies, and apps.

Peter Yared is the founder and CEO at Transpond, which has delivered numerous connected television projects with partners such as CBS, Brightcove, Rovi, and Yahoo. Peter has 15 years of experience helping companies adapt new technology platforms and was most recently the founder and CEO at ActiveGrid, a commercial open source company delivering the LAMP stack to the enterprise. Previously, he was CTO of Sun Microsystems’ Liberty Network Identity initiative. Peter was also CTO of Sun Microsystems’ Application Server Division. Before its acquisition by Sun, Peter served as CTO of NetDynamics, which pioneered the then-leading J2EE application server. Earlier, he was founder and CEO of JRad Technologies, an enterprise Java company acquired by NetDynamics.