If 2015 was a year of transatlantic tussles between U.S. tech firms and E.U. lawmakers, 2016 is shaping up to be more of the same.

Google faced yet another grilling today by the U.K. Parliament’s Public Accounts Committee over the way the company pays taxes. This follows the 2012 public tax-avoidance probe by the Committee into Google, Amazon, and Starbucks over the way they set their businesses up to minimize the amount of tax they pay.

The latest brouhaha centered on Google’s recent deal with the U.K. tax body HMRC, which would involve Google paying £130 million ($190 million) in back taxes covering a 10-year period. This has been labeled a “sweetheart deal” and “derisory” by critics, so as a result of the uproar, Matt Brittin, president of Google Europe, Middle East, and Africa, and Tom Hutchinson, a tax expert and vice president at Google, were called to give their side of the story. 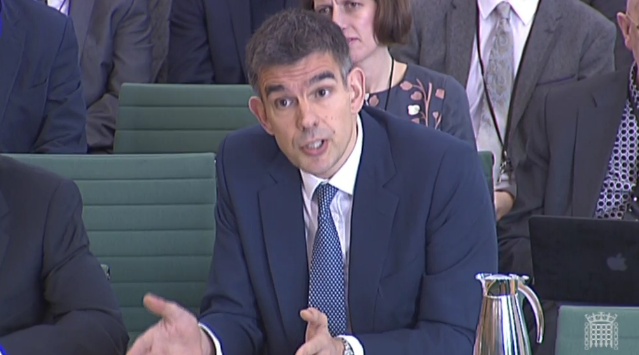 The tone of the Q&A was aggressive from the offset, with Meg Hillier, chair of the Public Accounts Committee, becoming almost personally abusive toward Brittin.

The overall goal of the hearing was to establish one thing: Google has a lot of money, and it’s not paying enough tax into the U.K. coffers. After agreeing that the U.K. accounts for 11 percent of Google’s sales globally, with revenues over the past 18 months of £1.18 billion and profits of £106 million, things moved on to Mr. Brittin himself.

Meg Hillier (MH): “Mr. Brittin, we’re here, the tax payers in Britain — do you hear the anger and frustration out there, that with those huge figures, that you settled for a figure of £130 million?”

Matt Brittin (MB): “Absolutely, and I welcome the chance to come and talk to you about this. I understand the anger.”

MH (voice getting louder): “Do you really understand the anger Mr. Brittin? What do you get paid Mr. Brittin?”

MB: “If that’s relevant, I’ll happily disclose that to the committee.”

MH: “You don’t know what you get paid? Tax payers, our constituents, are very angry — they live in a different world to the world that you live in, if you can’t even tell us what you’re actually paid. I wonder if you’ve got tin ears? That you can’t hear this? You went out there publicly to parade this tax deal…”

Brittin calmly interjected to reiterate his understanding of Britain’s anger, but the tone of the subsequent discussion was set. Oftentimes it appeared that members of the committee, of various political persuasions, were rounding on the Google duo more as a way of venting public anger at the company than in any attempt to establish a greater “truth” behind the company’s tax affairs.

The bottom line is that we already knew the answers to most of the questions, because Google has trotted out the same answers a million times before: Its complex global setup, which involves subsidiaries in Bermuda, Ireland, and elsewhere, may well be “tax-efficient,” but it operates entirely within the legal frameworks permitted by the countries involved. Tax experts on Twitter were quick to counter Google’s well-rehearsed responses, but ultimately that will count for squat.

Bermuda *does* have an impact on tax paid in the UK. Without the Bermuda tax haven Google would have no incentive to avoid UK taxes.

After Google left the stage, the panel questioned HMRC officials about the £130 million settlement, the result of a six-year investigation. In explaining why Google wasn’t fined for “underpaying” previously, Jim Harra, HMRC’s head of business taxation, explained simply that proving deliberate deceit “was very difficult.”

In short, we didn’t learn a whole lot of new facts today about Google’s so-called tax avoidance, but we did receive a big reminder that the knives are out for the Internet giant. Whether this ultimately translates into more tax being paid remains to be seen.

Elsewhere in Europe, news emerged yesterday that Google and other search engines will have to expand the scope of compliance with “right-to-be-forgotten” legislation, which means that search results in such cases will be scrubbed from all global variants of search engines for web users in any E.U. country.

To recap, the right-to-be-forgotten ruling was designed to help individuals hide web pages that hosted irrelevant or out-of-date information about them. However, the ruling so far has meant that only E.U. versions of search engines — such as .co.uk, .de, or .fr — were impacted. With the latest development, which is the result of a request made by France last year, search engines will have to de-index web pages from all local search portals, including Google.com.

Google filed a public appeal against France’s initial request last year. “This is a troubling development that risks serious chilling effects on the Web,” Peter Fleischer, global privacy counsel at Google, said at the time. But the French regulator rejected these objections and said that if Google did not comply it would recommend sanctions or fines against the company. It wasn’t clear who would emerge victorious from this standoff, but if these latest reports prove to be correct, it seems we may have a winner.

We’re only six weeks into the new year, but 2016 is shaping up to be another turbulent twelve months of wrangling between U.S. tech companies and Europe officials, with issues such as Android and anti-competition still to be resolved, not to mention the renegotiation of the Safe Harbor data-transfer pact, which has yet to be finalized.