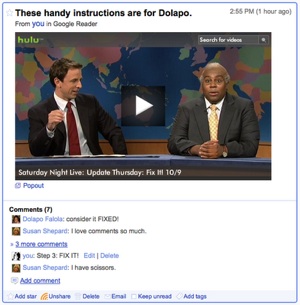 Huh, I guess I might have to pay attention to the “shared items” section in Google Reader now. The search giant already emphasized the sharing area of its site for reading RSS feeds in the redesign unveiled in December, but it just added the crucial missing ingredient — comments.

Now, when you your friend shares an article with you and others they’re connected to in Reader, you can actually start a conversation with them about that article right in Reader.  Previously, users could add a comment when they shared an article, but that was it. What’s the point in sharing something if people can’t talk back? That’s why, even when I fid good articles in Reader, I’m more likely to share them through other means — I’ll email it to people, or post in in FriendFeed, or link to it on Twitter.

In other words, I don’t think of this as just an additional feature, but a big step towards turning Google Reader into a real social news service, one that may eventually compete more directly with sites like socialmedian and MeeHive. The blog post announcing the feature says this turns Reader into “your new watercooler,” which sounds about right — I know I’ll be putting more effort from now on into connecting with friends in the service and keeping track of what they share.

Other features include the ability the see all the comments in your corner of the Reader social network through “comment view,” and to view multiple comment threads if more than one friend shared a specific item. Google says there’s “much more planned” for the commenting feature. Still missing, however, is the “most” shared area that VentureBeat writer MG Siegler says must be coming eventually.

On the downside, this only increases the fragmentation of online discussions — if I want to see everything that people are saying publicly or semi-publicy about, say, one of my posts on VentureBeat, I can’t just look at the on-site comments, but also on Facebook, FriendFeed, Twitter, and now, Google Reader. That’s why a service like UberVU, which gathers all (or at least most) online discussions back into one view, could become increasingly important.