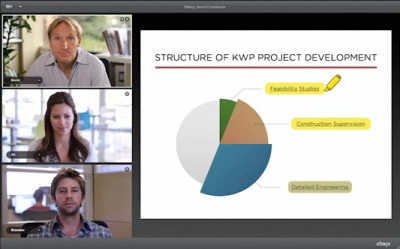 The new service is called “HDFaces” and allows up to six people in the same video confrence. The example to the left shows what a three-person conference looks like. Calling the service “HD” is a toying with the term a bit, because each person’s stream displays at 640 x 480 pixels, with a total maximum resolution of 1920 x 960 pixels. Regardless, it’s a useful addition.

“GoToMeeting with HDFaces changes the definition of face-to-face meetings from ‘a place you go’ to ‘a thing you do,'” Brett Caine, General Manager of Citrix Online Services division, said in a statement.

The best part of the introduction of HDFaces is that it is free for existing GoToMeeting customers. GoToMeeting’s standard pricing runs $49 per month or $468 per year. Businesses can take part in a free 30-day online trial.

Citrix has been looking for new ways to expand the widely used GoToMeeting this year. In April it launched web conferencing services for the iPad. GoToMeeting also recently launched an app for the Android platform. Citrix has said it plans to add video conferencing to its apps in the future.

Are you a current user of GoToMeeting? What do you think of the addition of video conferencing?